The company’s international outlook and expanding portfolio have helped it to record increased revenue and profit figures for 2011, and maintain its strong order book for 2012 and beyond.

In the past year, IHC Merwede’s revenue has increased by four per cent to reach € 1.05 billion. The company’s net profit has also increased to € 103 million with a solvency ratio of 40%, demonstrating that IHC Merwede is in strong financial health and able to implement its growth strategy.

With sales amounting to € 1.057 billion, IHC Merwede assured itself of a substantial order book of € 1.18 billion – the equivalent of more than one year’s workload.

Internationalisation continues to be an important priority for IHC Merwede as it succeeds in reducing costs and meeting the needs of its markets.

In addition, the company offers a one-stop shop approach of fully integrated vessel and equipment packages, which have proved to be a powerful business proposition.

IHC Merwede is continuing to expand its capabilities and portfolio through acquisitions and by forging links with other organisations to help build longlasting customer partnerships.

Despite the uncertainty created by Europe’s financial crisis, the rest of the world’s markets – such as South America, Africa and Asia – are still growing which made it possible for IHC Merwede to continue strengthening its position within the international maritime industry.

There are many ongoing projects around the world, and markets in China and India are continuing to grow.

However, it is taking longer for these customers to make purchasing decisions and there is fierce competition.

The wet mining market is developing quickly and the deep-sea sector is a long-term business driver, which is showing promise.

To capitalise on this, IHC Merwede has set up a mining division for ongoing investment.

The offshore market for ships made a comeback during the turn of the year, thanks to the boom in for example South America, where Brazil is becoming a powerful force.

IHC Merwede’s advanced offshore equipment has also been identified as an area for expansion and the company is moving towards building major maritime work tools.

This sector has established itself over the past year and is encouraging for the business as a whole.

Growth has been achieved by expansion into the different markets of dredging, mining, offshore and renewable energy.

IHC Merwede is active in multiple markets and will continue to pursue growth by developing new products and markets, and acquiring companies that fit within its corporate profile.

The financial side of the business is becoming increasingly important in today’s markets, not just during the period of construction, but also after delivery.

Arranging pre- and post-delivery finance is becoming an essential feature in many contracts. In addition, life-cycle support is growing at a steady rate and helping to expand IHC Merwede’s overall business.

IHC Merwede is already a truly international company and it has been producing the majority of parts, components and major equipment abroad for years.

The trend towards increased internationalisation continued in 2011.

The number of projects assembled outside The Netherlands is growing, allowing the company to deliver its customary high-quality ships on schedule through an impressive logistical process.

A good example is the build of the 12,000m³ trailing suction hopper dredger, CHANG JIANG KOU 01, at IHC Merwede’s Kinderdijk shipyard in The Netherlands and its sister vessel, CHANG JIANG KOU 02, which was constructed at the

The company will continue to spend three per cent of its revenue in innovation and product development in 2012.

There is a never-ending desire to improve existing technology through incremental innovation and increase revenue.

Regarding process development, IHC Merwede has reorganised its shipbuilding activities and created a new approach to its business, the product market combination (PMC) structure, which has brought it even closer to the market.

“This is a clear sign that our strategic approach is making a significant impact with an integrated offering of innovative vessels, advanced equipment and life-cycle support across the dredging, mining and offshore markets. The longterm future also looks good for the business as a whole and the expectation is that IHC Merwede will maintain its revenue over the next financial year.” 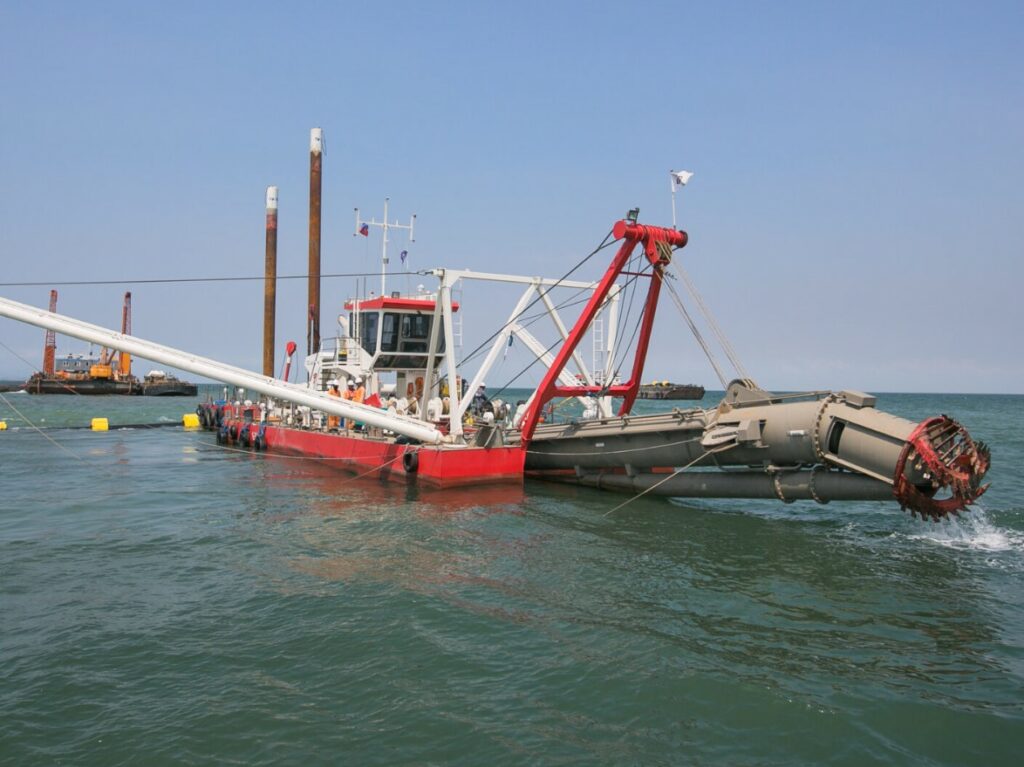