The vessel is named for the Dredging Division’s top technical and equipment executive, Charles R. (Charlie) McCaskill. It is the third finished product of WMI’s four-year, five-dredge $200 million-plus capital investment initiative formally announced in May 2011. Approximately two years from now, a new large class, 8,500 cubic yard hopper dredge, the Magdalen under construction at BAE Systems in Mobile, AL, will become WMI’s third hopper dredge. It will be WMI’s largest, fastest, most fuel efficient, most powerful pumping, and most highly automated hopper dredge, and will double WMI’s current hopper dredge capacity.

These two new dredges will be the most advanced U.S. vessels in their respective categories. They are designed specifically for conditions found offshore of the U.S. coast.

“The two new dredges alone, built in U.S. shipyards, represent new investment exceeding $135 million,” said Richard S. Weeks, WMI President. “The McCaskill and the Magdalen will result in the creation of 125 permanent new, well-paying jobs. I am exceedingly proud of our team as we put together these two projects, vessels which will provide a strong platform for our future growth. July 16, however, is the day to celebrate the McCaskill , to hear from our elected officials, and to thank all of our friends and suppliers for coming together to produce this magnificent vessel.”

“As I said at the formal announcement, I remain optimistic about the future of the U.S. marketplace. Both the growth of international trade and the U.S. seaport industry, and the wide acceptance of beach nourishment as the coastal and shore protection option of choice, demand new energy-efficient tools to be brought into the marketplace,” continued Mr. Weeks.

“The new dredges will add substantial capacity to the domestic dredging fleet, and coupled with WMI’s dredging expertise, strong field management, and formidable support network, will significantly enhance our competitiveness in the marketplace,” said Executive Vice President Eric Ellefsen. “Weeks Marine prides itself in being a leader in the dredging industry. The expansion of our dredging fleet demonstrates our commitment to better serving our customers, particularly the U.S. Army Corps of Engineers (Corps) and the U.S. Navy.”

“While we have a long track record serving the Country’s dredging marketplace, we need to refine and sharpen any competitive advantage we have,” said Dredging Division Vice President J. Stephen Chatry. “Our competitors have also added substantial capability. That is why we are dedicated to building and operating the most technologically advanced, fuel efficient, and environmentally sensitive equipment in the marketplace.”

“The U.S. dredging industry is strong and competitive, but there is always room for improvement as engine technology and automation advance,” said the dredge’s namesake Charlie McCaskill. “I am especially proud of my department and of all our partners in this complex undertaking. We designed and built a world-class vessel.”

With the American Dredging purchase, WMI acquired the RN Weeks (ATLANTIC AMERICAN), thus entered the hopper dredging market for the first time. In early 1998, WMI purchased Gulf Coast Trailing from T.L James & Co., a large family-owned Louisiana company thereby acquiring a second hopper dredge, the BE Lindholm (OUACHITA). Later that year, WMI purchased most of T.L. James’ remaining marine assets—at the time the second largest US dredging company and largest contractor in the Gulf of Mexico. Over the years, the company has operated a varied fleet of pipeline dredges to service Corps requirements on the East and Gulf coasts. WMI also continues to operate clamshell/bucket dredges for both the Corps and private terminal clients. WMI is ranked 86th on ENR’s 2011 top 400 contactors list.

For the purpose of modernization and re-powering, the hopper dredge BE Lindholm, and pipeline dredge Captain Frank (TOM JAMES), were out of the market in 2011. Both dredges are now back at work. The McCaskill will join Weeks Marine’s large and diverse pipeline dredge fleet. The McCaskill represents a major addition to WMI’s considerable dredge, tugboat, booster, hopper barge, and industrial workboat fleet. A fifth ocean-going pipeline dredge, the1996-built EW Ellefsen (MERIDIAN), will be re-powered with accompanying electronic and automation updates as soon as possible.

In recent years, WMI has added two highly-automated, ocean-going boosters, four 7,800 cubic yard hopper barges for long distance hauling, various dump scows, and deck barges and numerous other support vessels. Dredge pump and booster capacity is very important as beneficial uses of dredged material, further and further from the dredge cut, has become the “new norm” in a world where environmental sensitivity and restoration is a sought after societal objective.

The private sector hopper dredging industry got its start in the late 1970s. Hopper dredges, like the Magdalen, are self-propelled vessels that excavate material through “drag arms” from the ocean or river floor, pumping the material into the vessel’s “hopper.” They are manned by USCG-licensed seafarers and are used, most critically, to maintain the ocean entrance channels to the nation’s seaports and naval facilities. More and more frequently, however, hopper dredges are the tool of choice for beach restoration as quality sand “borrow areas” are being found further from the placement area.

As entrance channel hopper dredging was transformed from government-owned, steam powered vessels, to modern private sector diesel electric vessels in the late 1970s and early 1980s, the Corps eventually settled on operating four government hoppers. Two of these are now operated in Ready Reserve status, as part of the Corps’ commitment to “using industry first.” This policy is implemented through an emergency response protocol called “raise the flag,” a procedure that was developed by the Industry-Corps Hopper Dredge Management Group (ICHDMG). “Using industry first” produces the highest demand possible for new equipment and private sector investment. It is one reason why WMI was eager to build the Magdalen, the largest single investment in the company’s history.

The private hopper dredge fleet was largely built from 1977 to 1987. Prior to 1999, WMI’s dredge RN Weeks, was the Nation’s newest hopper dredge, having been christened in 1987. Since 1999, the dredging industry has built three new large hopper dredges. The Magdalen will be the 14th U.S.-flag hopper dredge. 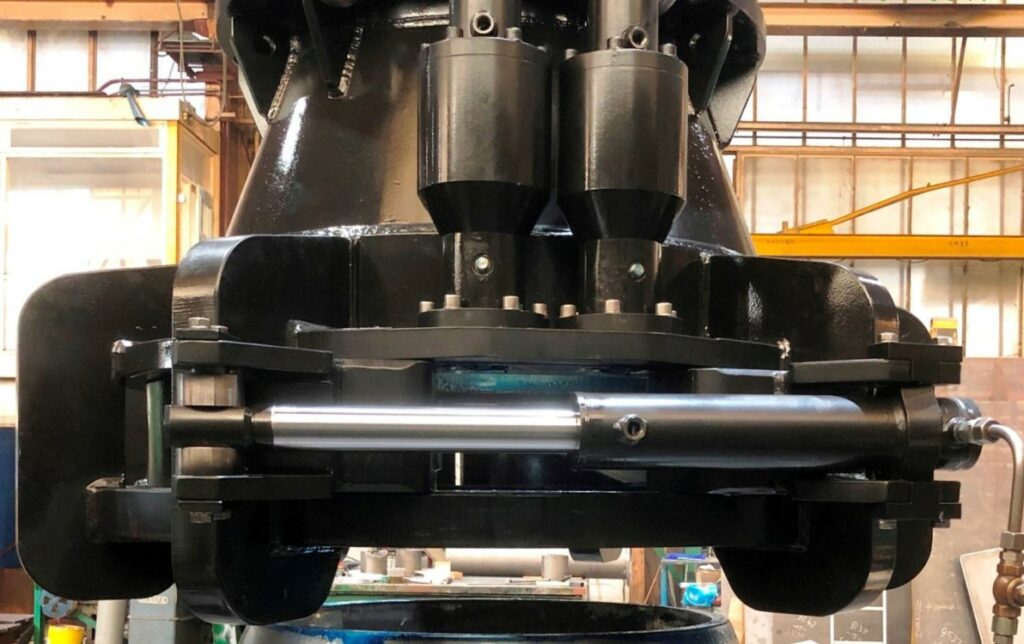