His Highness Sheikh Hazza bin Zayed Al Nahyan, National Security Advisor and Vice Chairman of the Abu Dhabi Executive Council, acknowledged the successful completion of Khalifa Port through a formal visit to view operations at the state of the art flagship container terminal, the most technically advanced in the region.

The official inauguration of Khalifa port will take place by the end of this year.

Praising the tireless efforts of those involved, which have culminated in the successful launch of commercial operations at Khalifa Port, His Highness said, “Khalifa Port embodies the commitment of the wise leadership towards establishing vital drivers of economic growth which will boost economic and commercial sectors.”

His Highness expressed his hope that this significant project would contribute to greater employment opportunities for UAE nationals, fulfilling the vision of His Highness General Sheikh Mohammed Bin Zayed Al Nahyan, Crown Prince of Abu Dhabi, Deputy Supreme Commander of the UAE Armed Forces to enable the nation’s workforce to play a vital role in the development the UAE.

His Highness added, “We are confident that Khalifa Port with its modern technology and equipment will contribute to boosting global maritime trade with the UAE, and Abu Dhabi in particular.”

During his visit, His Highness witnessed the state of the art technology and sophisticated engineering at Khalifa Port, which as a significant economic resource, will be one of the major contributors towards achieving the Abu Dhabi Economic Vision 2030 target of a sustainable and diversified economy.

Speaking at the occasion, Dr Sultan Ahmed Al Jaber, Chairman, ADPC, said, “This achievement has been made possible by the far sighted vision of His Highness Sheikh Khalifa Bin Zayed Al Nahyan, President of the UAE; and the wise directives and continuous support of His Highness General Sheikh Mohammad Bin Zayed Al Nahyan, Crown Prince of Abu Dhabi and Deputy Supreme Commander of the Armed Forces; and the immeasurable support provided by His Highness Sheikh Hazza Bin Zayed Al Nahyan, National Security Advisor and Vice-President of the Executive Council. I would also like to recognise the cooperation provided by Abu Dhabi’s Government departments and official organisations in enabling this project to be successful.”

Dr. Al Jaber continued, “Two years ago, ADPC made a commitment to complete the project by the 4th quarter of 2012. I am very proud that we have achieved that goal ahead of schedule, to specification and below budget. Khalifa Port is open for business and ready to handle two and half million containers and twelve million tons of general cargo per year.”

Dr. Al Jaber went on to say that Khalifa Port is a critical element of Abu Dhabi’s economic infrastructure, which will enable the achievement of the Economic Vision 2030 target of a sustainable and diversified economy.

His Highness toured the advanced Terminal Operational Building to witness the state-of-the-art computer technology controlling the container terminal and vessel movements. He also experienced a demonstration by the port’s six giant STS (Ship to Shore) cranes – amongst the largest of their kind in the world.

The visit was concluded by the placing of the final item in a time capsule to be buried at the port for future generations to discover in 2030, at the culmination of the Abu Dhabi Economic Vision 2030.

The last item inserted was an historic document of the original 100 steps construction plan, signed by the entire ADPC Executive team, as a pledge to deliver the mega project within budget and on schedule.

Khalifa Port’s container terminal swung into commercial action the second it opened with the unloading of containers from the MSC Bari, one of the largest container ships in the world.

The far sighted decision to invest in Khalifa Port has been perfectly timed, with additional port capacity being brought into service just as Mina Zayed reaches full capacity. Last year the port handled a total of 770,000 containers.

By the first quarter of 2013 all container traffic will be transferred from Port Zayed to Khalifa Port. Mina Zayed will continue to secure new business handling non containerised cargo and will focus on handling cruise liners, which will be ideal given its location in the heart of the city and its close proximity to various tourist destinations.

The far sighted decision to develop these commercial assets only when market demand has been established, has proved to be a highly effective strategy by the leadership of Abu Dhabi. 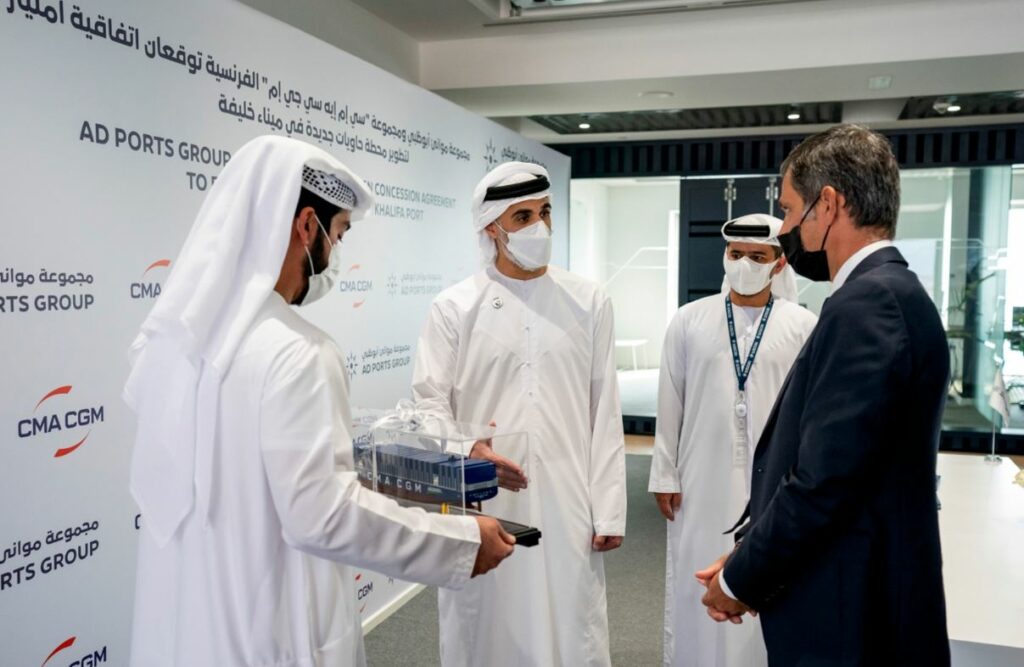