Fuel shortages and empty store shelves are a potential reality Alaskans will not have to face thanks to the work of 45 crewmembers aboard the Essayons, a U.S. Army Corps of Engineers-owned and operated hopper dredge.

The vessel performed a dredging mission for the Corps’s Alaska District from May 12 through June 18 in the Cook Inlet Navigation Channel. The project site is located six miles from the Port of Anchorage within Knik Arm Shoal, west of Anchorage and northeast of Fire Island. It would take 280,000 dump trucks to hold the amount of sand that was dredged.

“The crew are absolute professionals,” said Col. Christopher Lestochi, district commander. “They brought this project back to depth, which is very impressive.”

Deepening the channel was required after four million cubic yards of material accumulated in the past twelve years reducing depths and affecting navigation. This task demonstrated the earth-moving capabilities of the engineering marvel that calls Portland District home. The Essayons did not disappoint.

“We got about 2.8 million cubic yards in 35 days,” said James Holcroft, a captain of the Essayons. “That works out to $1.45 per yard, which is a great return on your investment.”

Built to operate anywhere in the world, the vessel is mechanized with a drag-arm system capable of dredging at a normal depth of 35 to 80 feet. Reminiscent of a fictional transforming robot, the sophisticated instruments allow constant production monitoring and enable the crew to maintain maximum efficiency 24 hours a day.

“Our expectation for them was 1.5 million cubic yards,” said Julie Anderson, project manager in the Operations Branch at the Alaska District. “This has been fantastic for us and the shippers. They’ve done a phenomenal job.”

This year’s project was the first phase of a multiple-year maintenance program to restore the channel’s capacity. It might not be appreciated by the everyday consumer, but it is necessary.

“Dredging is important to keeping shipping lanes open and safe for marine vessels of all drafts and ensures the Port of Anchorage stays open for business,” said Richard Wilson, port director.

According to a port fact sheet, an estimated 90 percent of the merchandise goods for 85 percent of Alaska’s populated areas are off-loaded at the docks in Anchorage. This includes goods for more than 200 villages and rural towns. About 1.4 million gallons of fuel flow to western Alaska annually through the port and it serves as a crucial hub for supplying aircraft and vehicles in Southcentral with petroleum products as well.

“The crew is incredibly professional, knowledgeable and committed to our mission of providing a safe and efficient port,” Wilson said. “We look forward to their next visit and to hosting the Essayons and her crew in the future.”

From automobiles to insect repellant, the dredge didn’t allow a little sand to obstruct Alaskans from receiving their commodities. Designed by the Corps of Engineers and constructed in Bath, Maine, in 1982 the vessel helps maintain the entrance to bars, rivers and harbors on the coasts of California, Oregon, Washington, Hawaii and Alaska. It also can service the Mississippi River and the East Coast during emergencies.

Holcroft said the biggest difference between dredging in Alaska and the Pacific Northwest is the 30 foot tides and fast currents, but otherwise “it’s pretty good digging up here.”

The inlet provided challenges that were nothing the Essayons couldn’t handle, but nature can swim too.

“The project site is also an important beluga whale habitat,” Anderson said. “We had to make sure that we are protecting our marine mammals by spotting them and shutting down if they come within 50 meters.”

Getting this magnificent ship to Alaska required a team effort within the Corps of Engineers because it is in such high demand. Other west coast districts contracted out their dredging operations allowing the vessel to work in Cook Inlet.

“It’s a great project,” Holcroft said. “We want to come back up and do this again.”

It’s unclear right now when the Alaska District will get to see the crew operate in the future, but until then “Let us try,” Essayons. 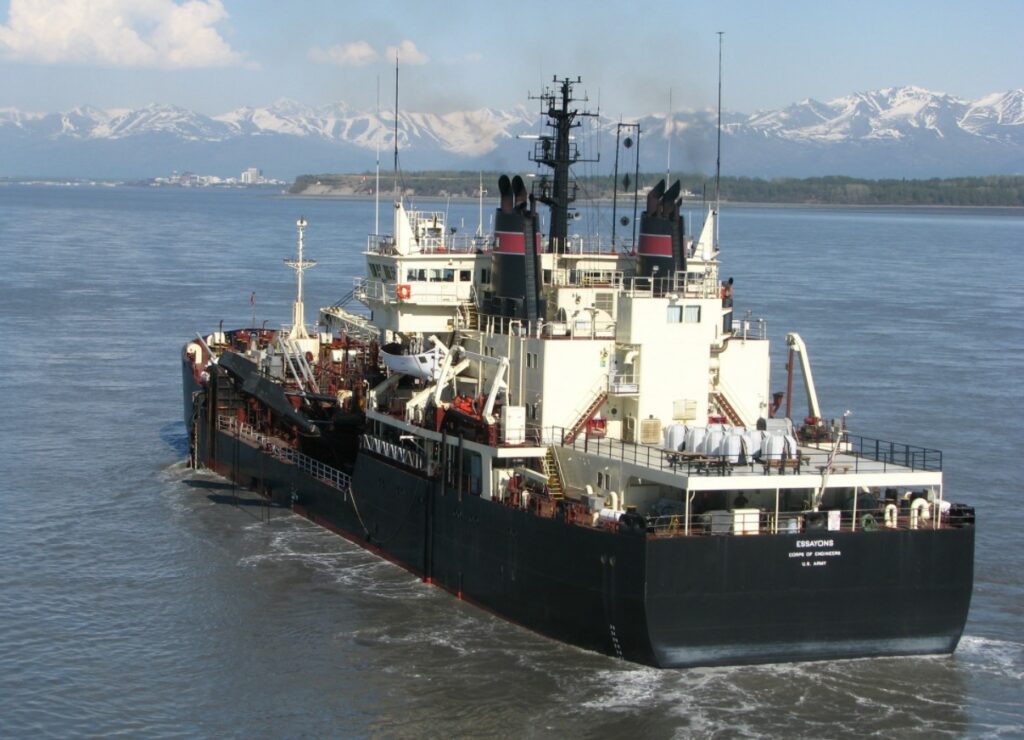