It’s a beautiful trade-off when one person’s discarded sediment becomes another creature’s beach nourishment or enhanced habitat for fish and wildlife.

A quarter-century of cooperation among diverse governmental and private interests is virtually unheard of when confrontation and gridlock are too often the norm. Yet the inter-agency Dredged Material Management Program, led by the Corps’ Dredged Material Management Office, has been fostering cooperation between agencies, the public and private interests for over 25 years.

“Working collaboratively that long is impressive,” said David Fox, Chief of DMMO. “We work with partner agencies with intelligent people who aren’t afraid to express their opinions, and yet we almost always arrive at a consensus.”

Over the years, the Dredged Material Management Program has worked out processes and exhaustively researched sites for placement of suitably clean sediments, enabling economically necessary dredging to be accomplished in a cost-effective manner.

Dredged material is subjected to “vigorous testing to assure the environment and organisms are not going to be harmed,” said Kelsey van der Elst, the team’s physical scientist.

Sediments tested and failing the standard for open-water disposal in one of the DMMP’s established disposal sites are disposed of upland. Often, that means unsuitable material is transported to the Roosevelt regional landfill in southeastern Washington at considerable expense, van der Elst said.

Some materials can provide port fill if not considered too bad, Warner added, and some qualify for fill that can be paved over. Other facilities have their own upland disposal sites, especially along the Columbia River.

The majority of dredged material found suitable for open-water disposal is placed on one of the DMMP disposal sites.

Warner said that disposal sites are “quite deep.”

Van der Elst added that they are specifically chosen for “minimal impacts.”

Fox said that most biological activity occurs in shallower waters.

For the cleanest material there are also a number of beneficial uses. The team assesses and separates various categories of sediments and “we marry up sediment for uses such as capping superfund sites, beach nourishment, or creating intertidal habitat,” which Fox described as an intertidal shelf where organisms and plants can thrive.

“We are very strict about separating clean from contaminated sediments,” Fox said.

Why isn’t clean material placed upland instead of in the water?

“Over 90 percent of the sediments that are tested under the DMMP program are found suitable for in-water placement,” Fox said. “That material is coming down the rivers. It has to go somewhere. We just move it a little further downstream in the system.” Clean sediments are part of the natural environment of Puget Sound, and keeping clean sediments in the system provides an important resource for the animals and plants that call Puget Sound home.

Warner added, “It would be horribly expensive, and why would that be a wise use of clean material that critters live in?”

“We hold public meetings every year, and all suitability determinations are online,” van der Elst said.

Warner said, “Agencies and users generally support the program. They like that the requirements are well defined.”

Fox said the team regards as its greatest achievement that the program in its 25th year is “still going strong—consensus is not so prominent as this elsewhere in government.”

He added that the Corps’ role is to balance the interests of stakeholders, as is done in the Regulatory process.

“It would be easier to be on one side—port or environmentalist,” Fox said. “We come up with solutions that meet in the middle, make sense and are practical.”

Evidence that the team’s science and procedures withstand scrutiny and challenges includes lawsuits, all of which “we have won,” Fox said.

In gauging trends, Fox expressed concerns about “the increasing complexities, which include the regulatory arena, more and more endangered species, and bioaccumulation.”

Warner explained that the term refers to the build-up of contaminants in organisms as those low on the food chain are eaten by larger and larger creatures, including humans.

Fox concluded that the increasing complexity doesn’t get the attention nor often the funding it calls for.

The team pointed to activists and port officials, skeptical of the program, who became advocates because of environmental advances and expanded port facilities as a result of stringent standards and beneficial uses.

Fox talks of milestones reached and “a heck of a lot of work on dioxin guidelines and preparing the Puget Sound Sediment Reference Material.” The reference material was created with sediment from the Duwamish. The concentrations of dioxin and PCBs in the material are known and vials of the material are used by labs to test the accuracy of the lab’s findings. Warner told about the team’s window of opportunity in obtaining samples throughout the region by taking advantage of a visit by EPA’s sampling vessel, the OSV Bold. 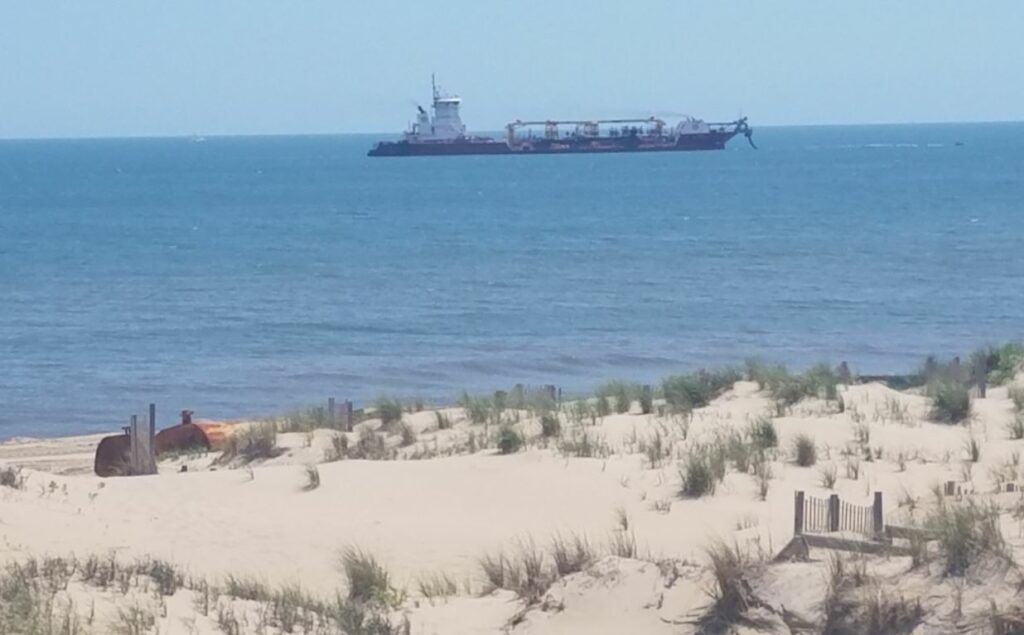