In the publication, Boskalis highlighted a number of fascinating projects, including the expansion of the Suez Canal.

‘Creating New HORIZONS’ also introduced the interviews with Samuel Leupold, DONG Energy’s Executive Vice President Wind Power, where he talked about the importance of being a leader rather than a follower and with kinetic sculptor Theo Jansen, in which he explained how he uses the forces of nature to create his magical Strandbeests (beach beasts).

The news that the Suez Canal was to be expanded was a global headline last year. Boskalis is a member of the consortium that will be executing most of this prestigious assignment, worth USD 1.5 billion, in an extremely short period of time.

Never before has so much equipment been deployed on a dredging project as during the expansion of the Suez Canal. Never have the time pressures on a project been so enormous, and never has there been a project with such high production volumes.

“The ‘new’ Suez Canal will, in part, be built parallel to the current canal. In other sections, the work will include widening and deepening the existing canal. A section of approximately 75 kilometers will be widened and deepened to -24 meters,” said Bas van Bemmelen, director of the Dredging Division’s Area Middle.

“A large part of that work — the construction of a section parallel to the present canal over a distance of approximately 35 kilometers — will be executed by a consortium comprising Boskalis, NMDC, Van Oord and Jan de Nul. This section goes straight through the Sinai Desert, an area that can be as high as +20 meters above sea level in some places.”

Currently, more than 1,000,000 m3 of material will be dredged every day. It’s a race against the clock but the work is still on schedule.

“The enormous time pressure means that all the consortium partners are having to deploy as much of their available equipment as possible, resulting in a fleet of approximately 20 cutter suction dredgers of different sizes and with different capacities, and a number of trailing suction hopper dredgers.”

“All the consortium partners are working hard on mobilizing equipment. That’s a gigantic logistical operation because, in addition to the vessels, we need large stocks of pipelines, anchors, pick points and earthmoving equipment. And accommodation for the workforce is another issue requiring attention: when the project is in full swing, there will be approximately 1,800 people at work, either onshore or on one of the barges or vessels. We have already arranged for a number of accommodation vessels.” 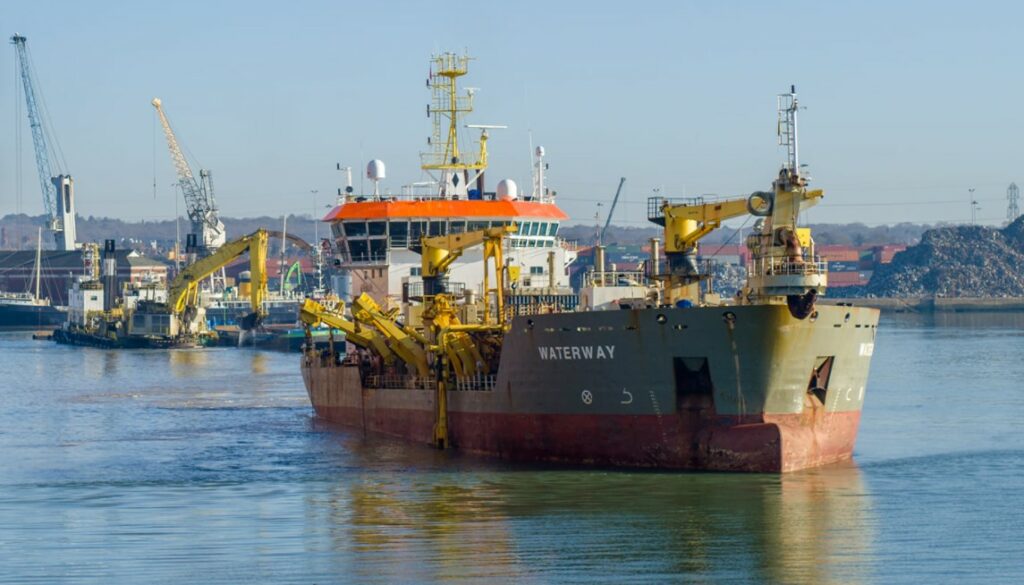