Dredge Yard – producer of mining/dredging components and equipment – has had a very busy year with the launch of a new dredger, supplying equipment and upgrading TSHDs and delivery of compact and economic sediment dredger for the Gulf region.

The company also visited several dredging conferences and events, presenting its latest achievements in the production of dredging equipment and technology.

That’s why we took the opportunity to have a quick chat with Mr. Basel Yousef, the Dredge Yard CEO, and Iulia Berchiu, Dredge Yard’s Marketing Manager, who provided us with invaluable insight into the company’s business plans and achieved goals.

“This piece of dredging equipment is the first in a series of versatile cutter suction dredgers with a discharge pipe diameter of 450 mm and will be complemented with the 350, 500 and 650 versions in the nearest future,” Iulia Berchiu said.

“The dismountable Euro Dredger 450 is one of our first projects that started in March 2015 with detailed engineering and is planned to be ready for delivery in the 4th quarter of 2015.”

All dredgers will have an inboard dredge pump and a hydraulic driven cutter head and a wide range of options will be made available such as a spud carrier system, anchor booms, submerged dredge pump and dredge automation and control.

Dredge Yard has also engineered and manufactured a compact and economic sediment dredger, also known as Auger Dredger, which will be used for a desalination plant in the Gulf region.

“This piece of equipment can be used particularly in rivers, streams, harbors, ponds, bays or artificial lakes to remove the accumulated sediments in a highly efficient and environment-friendly manner,” Basel Yousef said.

The sediment dredger has been designed for 9m dredging depth, with high production underwater dredge pump, 2 floating pontoons stiffened from inside, a ladder made of thick pipe and also stiffened at both ends.

All the components are driven by a single heavy duty hydraulic pack which is placed outside behind the cabin.

The TSHDs underwent complete modification at a dockyard in Dubai. The modifications were done with dredge equipment designed and produced by Dredge Yard using the latest CAD technologies and production methods.

“Modifying or converting old vessels will always be considered the most convenient alternative due to the cost cuts, less time involved in the makeover of an old ship than building a new one and the possibility of customizing the vessel according to the customers’ needs,” Iulia Berchiu said.

The TSHDs were upgraded by installing a shore discharge line on board and a bow coupling system on the stern of each dredger. The various components supplied with the discharge line included hydraulic gate valves, a complete bow coupling with structure, dredge pipes and bends.

In addition, all hydraulic cylinders for the bottom doors were replaced by Dredge Yard.

“By implementing ISO 9001 Quality Management System in Dredge Yard we didn’t only aim for International Quality Recognition, Consistency in Operations and Increase in Customer Satisfaction. It is also a way of empowering employees by providing them with clear explanations, procedures instructions and of course feedback on their performance,” Yousef said.

Dredge Yard attended the International Forum of Dredging Companies, Moscow, Russia in February 2015. They were sponsors of the event for the second time and Basel Yousef spoke about the Modification and Conversion of Existing Vessels.

“Dredge Yard team also visited the WEDA 2015 Dredging Summit and Expo in Houston, U.S. in June 2015, where they showcased innovative solutions for the dredging and mining industry including the latest complete series of versatile cutter suction dredgers as EURO Dredger and the economical, compact and low cost ECO Dredger,” said Yousef.

“Dredging in India 2015, at Taj Mahal Palace in Mumbai, was a very important event, where Dredge Yard’s representatives Teun Boerma and Michel Debo explained the high importance in innovative designing and building up efficient and cost effective dredger and dredge equipment.”

Due to the growth demand for the dredging equipment in the Indian region, Dredge Yard is considering to start construction of different ranges of cutter suction dredgers and trailing suction hopper dredgers on Indian soil.

At the Europort 2015 event in Rotterdam, the Netherlands, Dredge Yard introduced two new models of dredgers: the Auger Dredger and the Cutter Suction Dredger 450, currently being built for stock in the Netherlands. 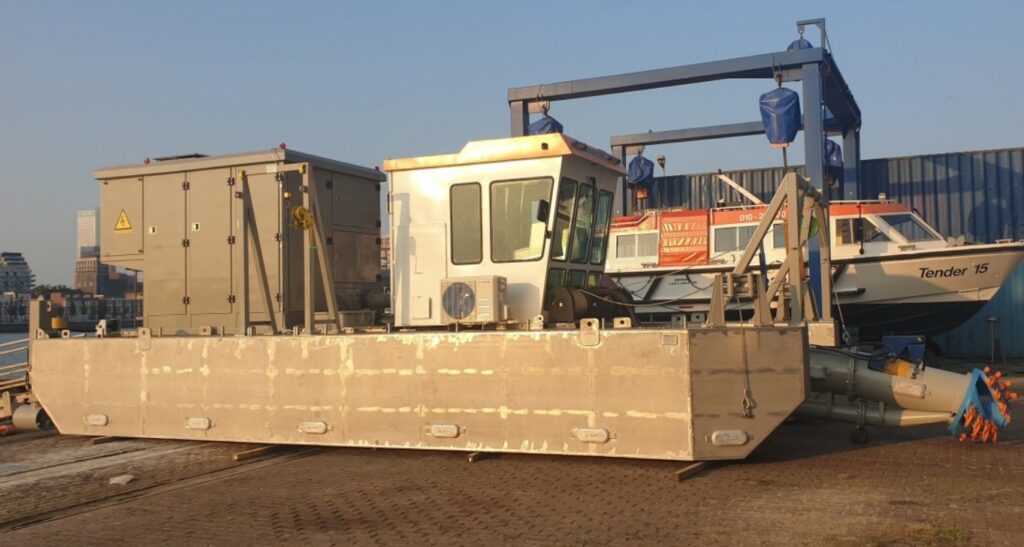