Louisiana’s Governor John Bel Edwards yesterday unveiled the newly-completed restoration of the Caminada Headlands, a 13-mile stretch of beach and dune running from the Belle Pass outlet of Bayou Lafourche eastward to Caminada Pass at the end of Elmer’s Island.

“This is the largest single ecosystem restoration the state Coastal Protection and Restoration Authority has ever undertaken, and the results are outstanding,” said Gov. Edwards.

An important project of Louisiana’s Coastal Master Plan, the headland restoration project cost approximately $216 million, and was funded by the state ($30 million in State Surplus), the federal Coastal Impact Assistance Program ($40 million), and the National Fish and Wildlife Foundation’s Gulf Environmental Benefit Fund ($145.9 million) established in the wake of the Deepwater Horizon oil spill to manage funds resulting from the settlement of federal criminal charges against BP and Transocean.

“The total project has re-established nearly 800 acres of critical habitat for shorebirds, such as the threatened piping plover, and other wildlife. In addition, restoration of Caminida Headlands strengthens the first line of defense against the persistent effects of coastal erosion in Louisiana,” said Jeff Trandahl, executive director and CEO of NFWF.

The new beach covers an area equivalent to approximately 1,047 football fields. The 8.4 million cubic yards of sand used was dredged from an ancient Mississippi River delta out in the Gulf of Mexico below Cocodrie.

The sand was barged 30 miles to the headland where it was used to build up 13 miles of beach to a height 4.5 feet above sea level, with a dune elevation of seven feet, and a dune crest width of 290 feet. The average depth of the beach from dune to shoreline is approximately 65 feet. 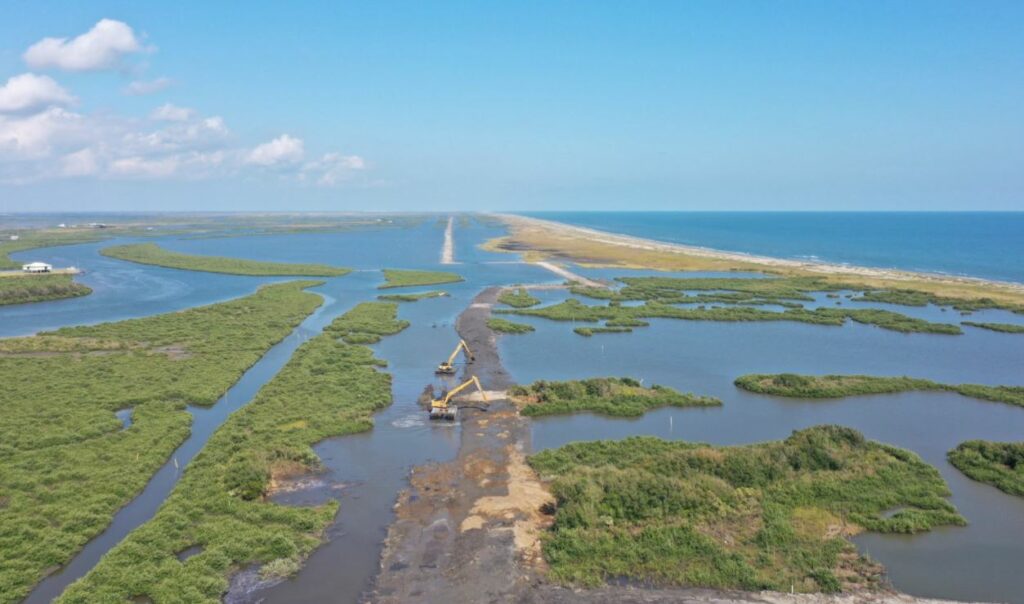