The U.S. Army Corps of Engineers, Jacksonville District, has awarded a contract to construct several miles of seepage barrier at the Herbert Hoover Dike (HHD) as part of its ongoing rehabilitation project for the earthen structure that surrounds Lake Okeechobee.

The Corps awarded the contract on February 28, for $55 million to Treviicos South, Inc. of Charleston, Massachusetts. The contract calls for installation of a seepage barrier in the dike for a distance of 6.8 miles from Belle Glade west to Lake Harbor.

“We installed a similar seepage barrier over 21 miles between Port Mayaca and Belle Glade from 2007 to 2013 which has reduced risk for the southeast part of the dike. With this contract, we will begin installing a seepage barrier west of Belle Glade and, through future contracts, continue installation along the entire southern half of the dike.”

The seepage barrier, also known as a partial cutoff wall, is a cement bentonite slurry mix poured into the dike itself. The barrier helps reduce erosion that can occur when the water level of Lake Okeechobee is elevated. Reducing erosion also reduces the risk of breach, thereby reducing the risk of flooding for people who live and work in the area.

USACE continues work to address the 32 federally-owned water control structures as part of its ongoing rehabilitation efforts around the 143-mile dike.

To date, eight structures have been replaced, one has been removed, and 18 are in various phases of construction to be replaced. USACE plans to award contracts in the future to replace two other structures and abandon three structures.

The total investment by USACE in rehabilitation activities since 2001 is more than $1 billion. 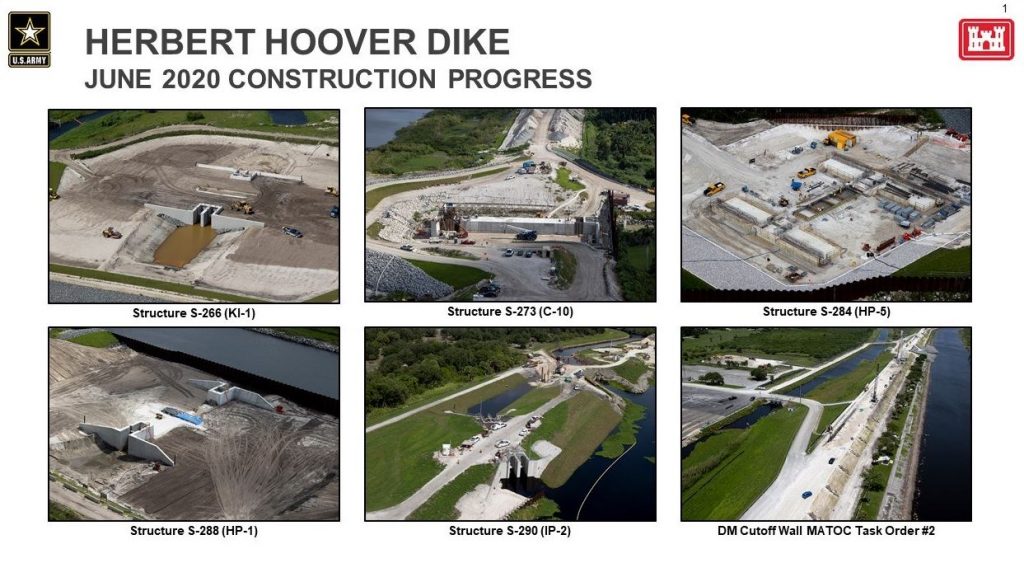