As the fiscal calendar nears 2020, officials at Norfolk District, U.S. Army Corps of Engineers are working to close the books by month’s end while taking a glimpse back at the past year’s accomplishments.

Projects ranged from its maintenance of federal navigation channels around the Virginia to sand replenishment along the shoreline and laying the groundwork to make cities more resilient in the face of coastal storms.

It starts with good planning

The district’s planning team is also working on a study in New York.

Norfolk District is working to continue the Lynnhaven River’s ecological recovery through an ecosystem restoration project with the city of Virginia Beach. Identified as one of 10 tributaries to be restored by 2025 in Virginia and Maryland, it was the only ecosystem-restoration program that was funded as a startup for the U.S. Army Corps of Engineers nationwide in fiscal 2019.

The Norfolk Harbor Navigation Improvement Project entered a new phase this past year, as the Virginia Port Authority and district worked closely on a design plan for deepening and widening channels in and out of Hampton Roads to allow the largest cargo ships access to ports.

The strong partnership between the port and the district is greatly contributing to the project moving out ahead of schedule — with dredging expected to start in fiscal year 20, years ahead of the typical timeline for similar projects.

In addition to the Norfolk Harbor project, the district’s operation branch continued to keep the nation’s water highways open.

In addition, the Operations Branch was also involved in the dredging for the Langley Back River Fuel Pier at Langley Air Force Base.

An estimated 4.4 million cubic yards of dredged material will be removed by fiscal year end.

“With the help of Congress providing the necessary funding, the Norfolk District was able to remove an unprecedented amount of shoaling in six federal channels in fiscal year 2019,” said Keith Lockwood, Norfolk District chief of operations branch.

The $22.64 million Virginia Beach Hurricane and Storm Damage Reduction Project includes the placement of 1.4 million cubic yards of sand from 15th Street to 70th Street. Work is slated to begin again in mid-November, once the time-of-year restrictions to protect migrating sea turtles ends.

The Sandbridge Beach Renourishment Project will kick off shortly afterward, putting both areas of the city’s oceanfront back to prescribed levels of protection against storm surge during tropical cyclones and nor’easters.

Twelve miles from the Maryland border, in the middle of the Chesapeake Bay, sits Tangier Island, a small primarily fishing community. Work on a new $3 million jetty to protect the island’s harbor and western channel from wave action is getting ready to take place.

Norfolk District finalized the project’s design in fiscal 2019 and is working on remaining land acquisition, allowing for the construction phase to begin early next year.

Engineers stabilized a portion of the river, which was eroding to the point it would have compromised a 24-inch sewer line, potentially spewing 700,000 gallons of sewage a day.

According to Richard Klein, Norfolk District chief of the Programs and Civil Works Branch, this has been one of the more challenging, and yet productive and rewarding years to be involved in civil works. 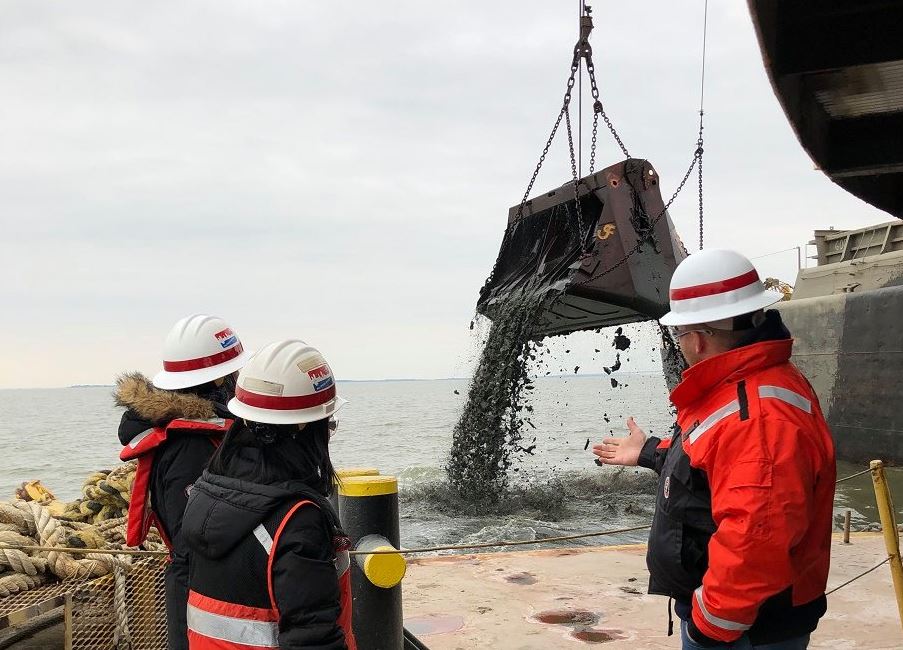