Beach work on the Rockaway Peninsula is in full swing as the long-awaited East Rockaway Inlet to Rockaway Inlet, and Jamaica Bay Project gets underway in Rockaway, New York.

There has been an authorization for the project since 1965, the Rockaway shoreline has experienced severe hurricanes and northeasters over the last 40 years.

After Hurricane Sandy Congress allocated more funds to construct a project on the Rockaway Peninsula, and a Beach replenishment project was performed shortly thereafter.

In May of 2019, the Corps and the City of New York laid an additional 348,000 cubic yards of sand at Rockaway Beach to replace lost sand due to heavy erosion after back-to-back nor’easters in March of 2019.

The larger main-construction project is currently underway, and Contract 1 consists of multiple beach improvements for Rockaway.

Two types of armor stone are being delivered to the beach in Rockaway to prepare for the beginning of groin construction. Groins are stone structures that are meant to slow down natural beach erosion.

Rockaway will be getting 14 new groins, while 5 others will be refurbished, in continuing efforts to further protect the peninsula and reduce coastal storm risk.

Also, the remains of aging timber piers along the project area will be removed.

Both types of armor stone are being excavated from quarries in New Jersey. Bedding stone will also be used as a foundation for the groins with core stones lining the inside of the groins. The groins will finally be capped off with type A and B armor stones.

Groin work is expected to resume until March or April of 2021, then the next phase.

Contract 2, which will begin and consist of a reinforced dune construction, and pedestrian beach crossovers made of timber structures for beach access spanning the new dunes for access from the boardwalk to the beach.

More sand placement in a later Contract 3 will occur as well as  Jamaica Bay side improvements which are currently in the design phase.

This project is being constructed in coordination with the City of New York, The New York State Department of Environmental Conservation, the National Park Service, and NYC Parks. 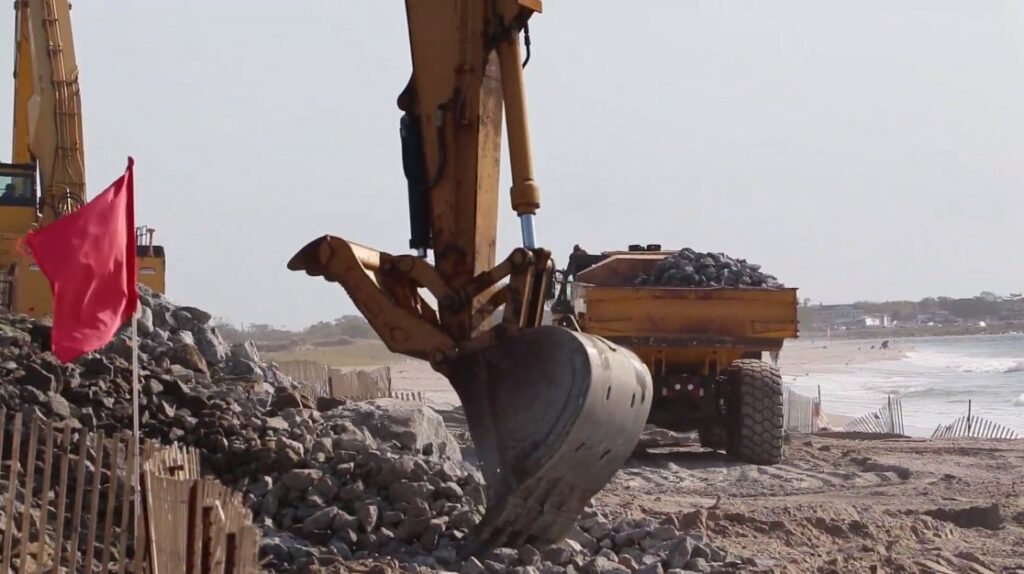