Salt marshes were created on the coast of Delfzijl in the north of the Netherlands in 2018. A section has been used as a trial location for salt marsh development.

Researchers from EcoShape studied the salt marsh for two years to learn more about the construction and development of salt marshes. The results of this trial can be used worldwide on sediment-rich coasts to enhance coastal protection and biodiversity.

The research focused on the change in the height of the marsh surface due to sediment accretion, wave attenuation and the development of biodiversity on the salt marsh. The findings are positive.

The vegetation is developing rapidly and model studies based on the current observations show that the height of waves passing through the salt marsh can be reduced by up to 60 percent.

Salt marshes are valuable nature areas and, with their rich vegetation, they act as natural breakwaters.

Because salt marshes capture sediment, they can rise in line with the sea level.

In addition, salt marshes capture CO2 and improve water quality. Encouraging the development of salt marshes is an example of Building with Nature.

The 15-hectare test location was split up into eight sections which varied in terms of the percentage of sediment in the ground and the sowing of samphire.

It emerged from the study that there is virtually no difference between the sections with 20 and 50 percent sediment in the ground.

In sections with only 5 percent sediment, little vegetation grew.

Sowing samphire had an effect in the first year only.

Project leader, Petra Dankers, said: “It is striking that there is now just as much vegetation in places where no samphire was sown. Sowing vegetation helped in the beginning but the effect was negligible after two years. In the meantime, 28 plant species have been found. That demonstrates that the wind and currents deliver enough seeds naturally.”

The research reports will be available on the EcoShape website.

The salt marsh also serves as a case in the book ‘Building with Nature – Creating, Implementing and Upscaling Nature-based Solutions’, to be launched by EcoShape during the Climate Adaptation Summit on January 25th.

Partners
The research is part of the Marconi Buitendijks project, a joint project of the provincial authority of Groningen and the municipal authority of Delfzijl. 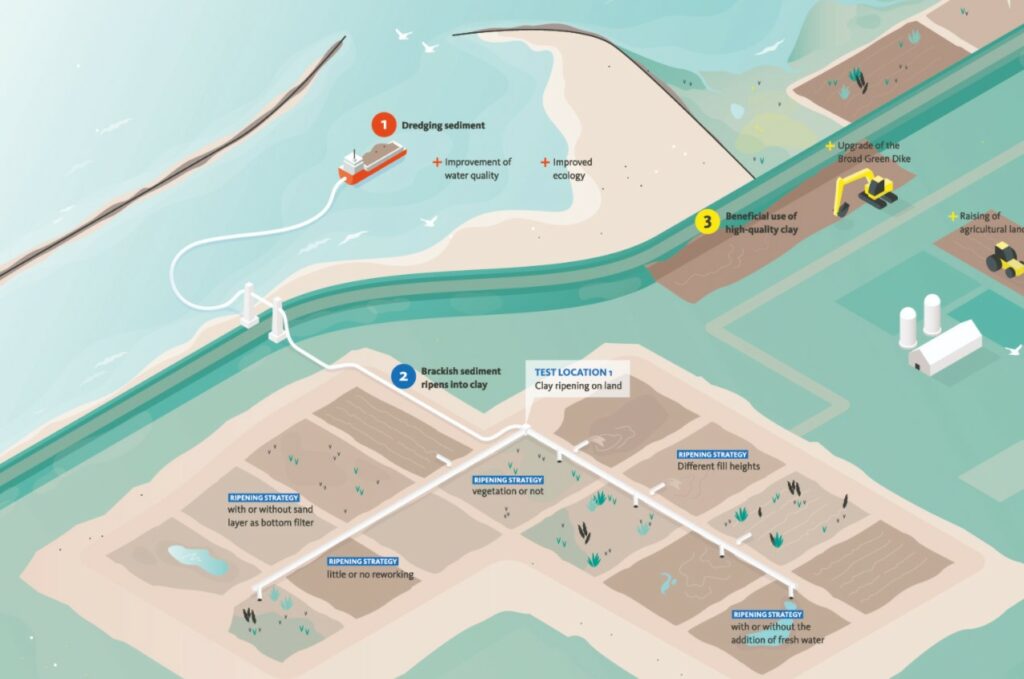