One of the UK’s newest and most versatile ‘marine renewables support vessels’ showed off some of her capabilities at Gills Harbour on the Pentland Firth this week.

The one-year-old ‘multi-cat’ vessel Orcadia, which was reported to have cost £3.5 million when she was delivered last year from Damen Shipyards in the Netherlands, was making her debut visit to the community-owned Caithness harbour on Monday afternoon (18.06.12).

The 24 metre-long vessel is capable of the kind of heavy towing that is likely to be required during the creation of two major sub-sea power stations off Caithness’s North Coast, scheduled to be completed within the next 8 years.

Yesterday Bill Mowat, chairman of Gills Harbour Ltd , which belongs to 600 electors in Canisbay Parish along the Firth’s southern shore from West Mey to John O’Groats inclusive, welcomed the ship’s arrival and revealed for the first time that there are ‘ambitious, but cost-effective’ plans in the pipeline for the future of the port.

Those involve a substantial 70+ metre lengthening of Gills Harbour’s main breakwater, dredging of a ‘turning circle’ in quiet waters for 70/90 metre long vessels, plus upgraded facilities in the harbour’s Inner Basin to regularly cater for ‘tidal stream support vessels’ of the 25-metre class, such as Orcadia or C-Odyssey, also a modern marine renewables vessel that has previously used the port

This comes as up-to-date details of the largest of the two tidal energy projects were outlined to interested Caithness folk at a ‘public open day’ in Canisbay Village Hall by MeyGen Ltd this week (Wednesday 20th June).

The ‘hidden’ power stations, constructed as linked ‘arrays’ on the seabed of the Firth’s Inner Sound and off the Ness of Duncansby, will use newly-developed ‘horizontal hydro’ generating turbines to convert some of the massive amount of ‘kinetic energy’ in the Pentland Firth’s strong tidal streams into electricity for household, business and industrial use.

Both are in the Eastern Pentland Firth, the narrowest part of the 16-mile long strait between mainland Scotland and Orkney where the tidal-streams flow most swiftly. The Firth’s Inner Sound, between mainland Caithness and presently-uninhabited Stroma Island is just 1.5 miles wide, while the main Firth has an average width of 8 miles.

The combined output by MeyGen Ltd and by Scottish Power Renewables, the two groups that have obtained the seabed licences off Canisbay Parish from the Crown Estate, for generating ‘renewable’ electricity, is forecast at c. 500 MW to be the twice as much as from Dounreay’s now-closed Prototype Fast Reactor, 20 miles away.

As her name implies, Orcadia is owned by a company from the Orkney Islands and she is registered in Kirkwall.

Scotmarine Ltd is headed by one of the North of Scotland most prominent entrepreneurs in ‘renewable energy’, Mr Barry Johnston, who has several companies operating in the field.

The nascent industry is already giving work to over 200 persons in Orkney.

Mr Johnston is known by many living along Caithness’s North Coast as the man behind the Pentland Firth’s newest landmark, the tall red-lit tower of the large community electricity-generating wind turbine on Flotta, an isle previously better-known for its major role in the North Sea oil & gas industry.

Those involved in tidal stream electricity developments are aware of Mr Johnston as the entrepreneur behind the multi-million pound Scotreneweables prototype SR 250 tidal stream generating set.

Built at the Harland and Wolff yard in Belfast, Mr Johnston’s Scotrenewables Tidal Stream Ltd’s SR 250 machine, weighing in at 100 tonnes, is the first floating device to send electricity to the National Grid from its sea-floor ‘turret’ anchoring point at the European Marine Energy Centre’s tidal site, at Falls of Warness, off Eday, Orkney, part of its two years of trials that began 15 months ago.

Already beamy Orcadia (she is 9.5 metres wide) has been successfully deployed ‘in challenging conditions’ on installing and maintaining a variety of offshore wind, wave-energy converters and tidal stream devices, and associated sea-bed ‘infrastructure’, including cabling.

The vessel has 4 powerful Caterpillar engines giving her a tug’s ‘bollard pull’ capability of 26 tonnes. This allows her to tow barge-mounted heavy equipment in strong currents, which could earlier be only done by using much larger ships.

Orcadia’s tasks also involve her use as a floating base for measuring the strengths of tidal streams using ‘Acoustic Doppler Current Profilers’, while she has a through-deck ‘moonpool’ that allows her to act as a diving support vessel, again a task which previously required a substantially larger vessel.

She can also be configured as a supply vessel, capable of carrying and handling several shipping containers on deck, as well as over 60 tonnes of fuel oil.

“I’m pleased to say publicly for the first time that our community company intends to develop the Inner Basin of Gills Harbour to allow it to cater for three vessels of the 25 metre class. at all states of the tides

“At present there are only plans on paper, but we anticipate having costings and detailed working drawings to hand within the next few months. We have kept the public agencies informed about this”.

The major breakwater extension and the additional ‘one-off dredging operation (there is almost no silting in Gills Bay) are both being undertaken by Pentland Ferries Ltd.

The extended breakwater will provide a guaranteed depth of around minus 5 metres LAT (Lowest astronomical Tides). It will be offset from the present breakwater to allow marine renewables vessels to be berthed at the quayside without interrupting scheduled ferry movements. Pentland Ferries Ltd, whose Managing Director and ‘driving force’ is award-winning Scottish transport entrepreneur Andrew Banks, operates the successful ‘short-sea-crossing’ year-round with its 2,800 tonne purpose-designed modern catamaran RO:RO freight and passenger ship Pentalina.

The planned new 100 square-metres dredged ‘turning circle’ will allow the vessel — and others of similar size – to be navigated inwards and outward-bound to/from Gills Harbour in full shelter at all times in forward motion, using a combination of ships’ rudder, twin or more engines and vessel side-thrusters ( and on occasions on-board winches), all of which is likely to prove valuable especially when strong NW winds are blowing.

“The unremunerated directors of Gills Harbour Ltd have chosen to pitch their main target market for contractors and subcontractors to the tidal stream utilities at the 25-metre-long class of ‘multi-task’ vessels, following detailed discussions recently.

“The professional advice that we have obtained has underlined our confidence that the Inner Basin can be adapted for this purpose in a very cost-efficient manner.

“Gills Harbour, lies at the inland apex of the most sheltered bay on the otherwise ‘open’ Caithness coast of the Pentland Firth, and is sited in between the two ‘notorious’ tidal races that emanate from the Caithness side of the Firth; The Merry Men of Mey, out to the West of Gills Bay and the Bores of Duncansby, lying four miles to the East.”

White water breaks every day of the year on the west-flowing ebb-tide at the Men, while the Bores, lying off John O’Groats, ‘work’ on every east-flowing flood cycle. In winter conditions, when those potentially-dangerous races are opposed by gales and driven waves, the multi-directional seas are known to swell up to as much as 12 metres, the equivalent of a collapsing four-storey building.

The ex-Councillor for NE Caithness on the Inverness-based Highland local authority added: “Gills Harbour is ideally situated to provide both additional comfort and safety for crews, engineers and vessels involved in Pentland Firth tidal stream operations, to substantially enhance overall productivity and to slash costs by allowing smaller vessels to be used than would be the case from other mainland ports, as those would have to transit the races either inward or outward bound during a normal working day”.

“The two Crown Estate seabed licences lie just 1 mile and under 4 miles from the harbour mouth so, as well as the above, there will be considerable fuel savings to be made.

“There will only be a viable future for tidal stream electricity as a new industry here, if costs can be reduced along the lines suggested by the recent report of the UK Parliamentary Select Committee on Energy & the Environment, which took detailed evidence on this issue”.

Looking further into the future, Mr Mowat stated that it was quite possible to envisage a completely enclosed Gills Harbour.

This would take advantage of the location’s natural shelter from St John’s Point/Head o’Crees from the prevailing Westerlies; its screening from ‘fetch waves’ by nearby Stroma and the Orkney Islands strung along its whole Northern horizon and the configuration of the coastline eastwards past Canisbay Kirk to the Ness of Huna that ensures that Gills Bay is largely free of North Sea origin ‘easterly’ swells.

And it would be possible to excavate a deep channel using a large back-hoe dredger to give a guaranteed water depth of minus 7 or minus 8 metres or even more at lowest tides right up to the end of the breakwater extension. 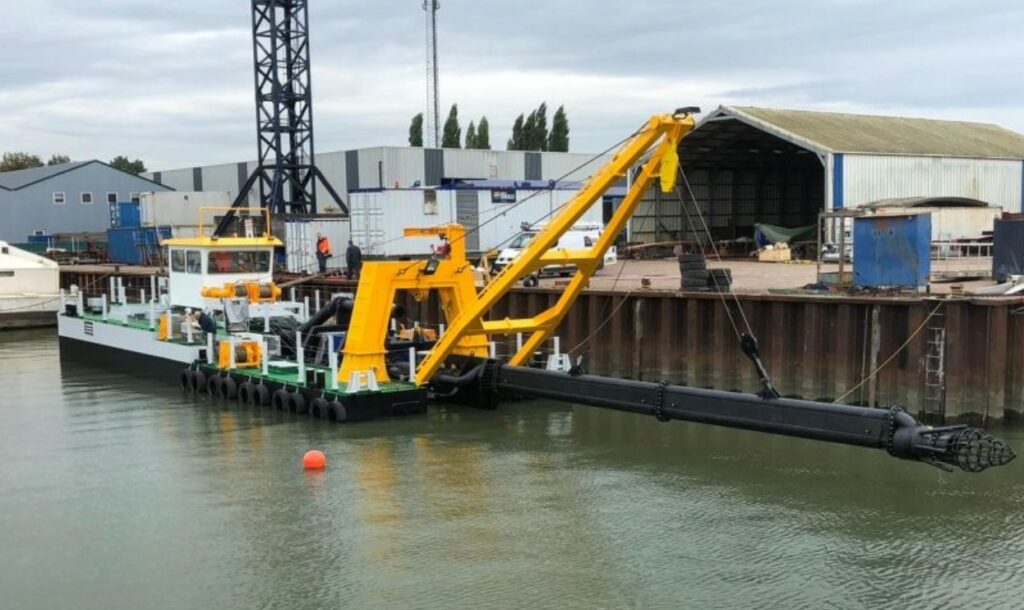