Anzali Port is a harbour town, near Rasht, on Iran’s Caspian Sea coast. (“Bandar” literally means “port.”) It is one of the most important seaports in northern Iran. It consists of an island called Mianposhteh and its surrounding lands. Tourist attractions include a clock tower called Manareh, the long harbour promenade, and the water-logged delta of and beach along the Sefid River.

Land reclamation from the Caspian Sea is one of the major methods for the development of Anzali’s land due to lack of available space near the port.

Also, the sudden rise in the water level of about two metres in the Caspian Sea after 1977 took everyone by surprise and caused widespread problems in several areas: flooding of urban facilities, destruction of roads and railways, damage to industrial infrastructure on land and offshore, and destruction of beaches.

The rise in the water level caused extensive erosion to marine environments and coastal communities. Several stabilization measures, such as installing heavy rock dykes and concrete piles, have been implemented over the years for protecting the coastline.

While hard structures have frequently been the solution, the decreasing availability of suitable large rock in proximity to the sites and the increasing cost of acquiring the rock or installing concrete has led to a growth in sand-filled geosynthetic solutions being adopted. Even in areas where suitable rock is readily available at a reasonable cost, the safety and flexibility of geotextile tubes have encouraged their use over the traditional approaches.

A look at the harder solutions previously used through the region for coastal protection. The cost of these heavy rock installations has increased steadily.

The selection of appropriate strength and grade of geotextile fabric for the tubes were based on the following parameters:

Ultimate tensile stresses developed due to handling and installation

The fabric stresses related to hydraulic pressures from the pumping of sand slurry into the geotextile tube were estimated from an analysis of the geotextile tube using the GeoCoPS software (www.reslope.com). This software allowed the designer to define the common but important parameters such as initial and final (consolidated) density of the infill material, the pressure at the inlet tube, level of water outside the tube, perimeter of tube (fabric width), reduction factors for durability of geosynthetic fabrics, maximum height of tube, and maximum tensile stress on tube.

Based on the analysis, a woven polypropylene geotextile was specified for tube construction [1].

The ultimate tensile stresses under internal hydraulic forces and pumping pressures are assessed from the results of the geotextile tube hydraulic analysis. These are summarized below:

Installations of the geotextile tubes may be carried out from a pontoon or a small dredger, or submersible hydraulic pumps can be used. Caspian Sea – Geotextile Tubes

Depth of water and tidal fluctuation

Mobilization methods and device for filling the geotextile tubes

There is no considerable tidal fluctuation in the Caspian Sea but wavy and stormy conditions predominate. As such, each installation method should be adapted based on the time and climatology reports.

Sand deposits can be found anywhere along the Caspian Sea’s coastline, but hydrography should be done before starting any geotextile tube filling project.

Two installation procedures were considered for shallow water conditions on this project:

The latter method was selected based upon recommended technical and economical advantages for this particular site. Installation was conducted from a pontoon.

A layer of nonwoven geotextile was placed on the seaward face of the tubes after completion of the geotextile tube installation, and select rock of suitable size was placed as protective covering.

The first trial for installing the geotextile tubes was unsuccessful due to a lack of suitable dredger pumps but a second trial began in October 2011 with 20 panels of geotextile tubes installed in less than a month. The speed at which the second trial’s tubes were installed was significantly quicker than hard rock methods of installation. 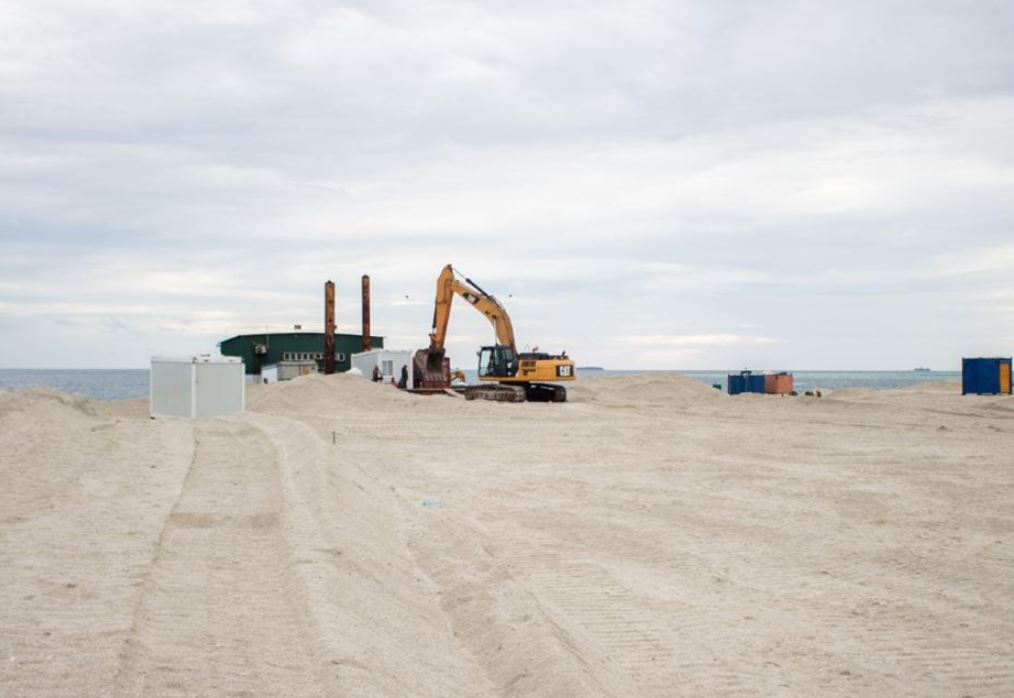