Governor Pat Quinn yesterday visited the East Peoria riverfront to announce the innovative Mud-to-Parks program, which makes use of soil dredged from the silt-choked Illinois River to build a new park on Lake Michigan.

Sixty barge loads of sediment dredged from the Illinois River at East Peoria are traveling 163 miles to the old U.S. Steel (USX) Chicago South Works site to provide 90,000 tons of rich soil for green space and community recreational use along the shoreline.

“Mud-to-Parks is helping Mother Nature return the soil to the land while boosting recreational opportunities and habitat,” Governor Quinn said. “Some of the richest soil on the continent, which is currently in Peoria Lake, originally came from the watershed. We’ve taken sediment that was clogging the Illinois River here in central Illinois and put it to good use for a park along the Lake Michigan shore.”

The 2012 Mud-to-Parks project follows shipments of 114,000 tons of Illinois River mud which now covers 25 acres at the South Works site in 2004 and 2007. Native grasses and small trees are now sprouting on property that was largely steel mill slag.

The sediment removed from Lower Peoria Lake on the Illinois River has the consistency of toothpaste when dredged and loaded onto barges. After the two-day trip up the Illinois River, Chicago Sanitary & Ship Canal, Calumet Sag Channel and Little Calumet River to a Lake Michigan slip, the mud is off-loaded, trucked to the site and spread on the slag. The mud then dries and develops a granular soil structure prior to final grading on the park parcel.

Sedimentation is the biggest problem facing the Illinois River, and was particularly evident during this summer’s drought. Each year, 14 million tons of sediment go into the river basin, the equivalent of 17,808 truckloads daily. This reduces navigability of barge traffic, hinders recreational boating, and destroys habitat for fish and waterfowl. The average depth of most of the Illinois River’s backwaters is now 2’ or less.

“Mud-to-Parks is a true green initiative. Removing sediment from the Illinois River opens shipping lanes, protects and creates jobs, enhances habitat and improves recreational access. Recycling that material and using it for open space projects has the same benefits at the arrival destination,” said Marc Miller, Director of the Illinois Department of Natural Resources (IDNR), which administers Mud-to-Parks.

The trailblazing idea was first conceived in the 1990s by Dr. John Marlin, then a scientist at IDNR. He ran a pilot project in 2002 in which sediment collected near Peoria was barged to a Chicago landfill and spread out. Grasses now grow on that site. In 2003, Marlin approached then-Lt. Governor Pat Quinn in his role as chair of the Illinois River Coordinating Council, and the Mud-to-Parks project at the USX site was underway.

“The project reduces the amount of soil from being taken from suburban construction sites and farmland. Reclaiming the soil from the river is a far-better alternative which can be used to address reservoir sedimentation in many other areas”, said Marlin, now with the University of Illinois Sustainable Technology Center.

“There’s enough sediment in Peoria Lake to fill a football field 10 miles high. Much of it was eroded from some of the best farmland in the world. After drying for a few months, it regains its favorable structure and provides an excellent media for growing a variety of plants,” said University of Illinois soil expert, Dr. Robert Darmody.

The 2004 Mud-to-Parks project was championed by Quinn and then Peoria-area Congressman Ray LaHood (now U.S. Transportation Secretary), and was hailed as an example of bipartisan cooperation. The location of that 2004 “mudding” is now blanketed with grasses and prairie plants. The Illinois Natural History Survey identified 79 species of plants on that former slag field, and determined that no new invasive plants were being introduced.

Sportsmen, boaters and bird-watchers will benefit from the initiative. The dredging increases deep water habitat for fish in the Illinois River. And migratory birds using the Illinois River flyway or Lake Michigan shoreline will find better-protected habitat and food sources.

Mud-to-Parks is also a critical component of Governor Quinn’s Millennium Reserve Initiative to restore habitat, rehabilitate brownfields, and increase public parks and green space. Administered by IDNR, Mud-to-Parks is funded by $8 million in Build Illinois bond funds appropriated in 2009. Recipients of current Mud-to-Parks funds include the Chicago Park District, Litchfield Park District, City of East Peoria, City of Decatur and the Fox Waterway Agency. Scientists at the University of Illinois Prairie Research Institute have worked on the concept of beneficial reuse of sediment for many years. In addition to shipments to Chicago, dredged soil has been used for cover at a Pekin, Illinois landfill and a strip-mined portion of the Banner Marsh State Fish and Wildlife Area. 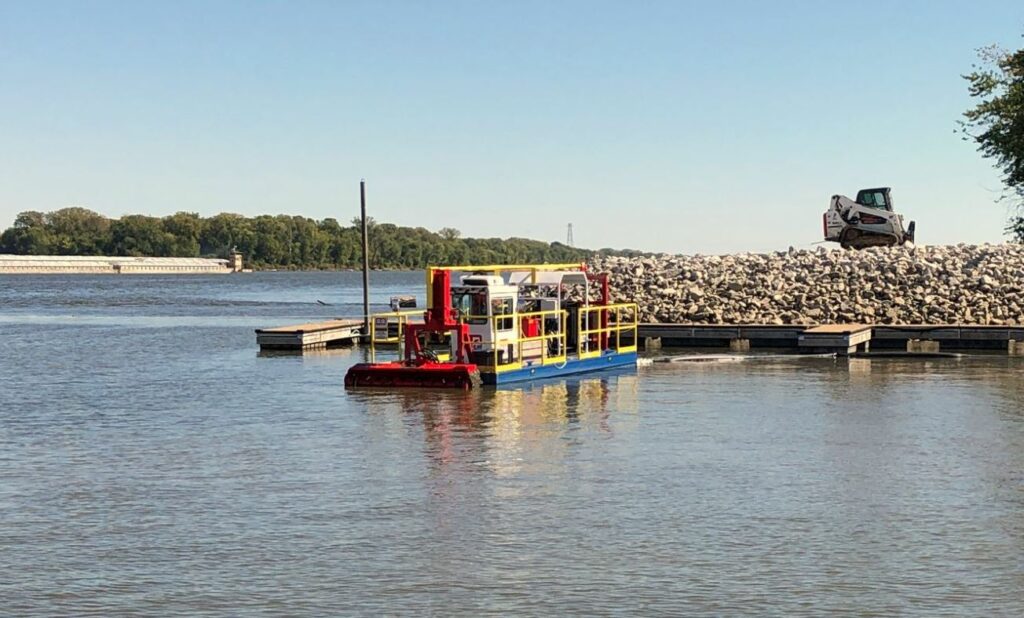