The long-awaited $25 million southern Monmouth County beach replenishment project kicked off yesterday with a ground-breaking ceremony on Manasquan Beach. Hurricane Sandy caused severe beach erosion along the five-mile stretch of the project. The massive beach re-nourishment work to repair and restore the beach to better than pre-Sandy conditions starts tomorrow.

“I was here on this very beach in the days after the storm with Mayor Dempsey and his team and it was a near unimaginable scene of destroyed homes, broken gas lines and crumbled debris,” Rep. Chris Smith (NJ-04) said. “The beach was gone. Today and over the next four months of this project, the Corps will rebuild these beaches and the lives of the people from Manasquan, as well as Sea Girt, Spring Lake, and Belmar.”

The total cost of the project is $25,254,400. The project is funded 100 percent by the federal government through the Army Corps’ Flood Control and Coastal Emergencies (FCCE) account. Dredging will take approximately 125 days to complete. The project will pump roughly 1,500,000 cubic yards of sand onto Manasquan, Sea Girt, Spring Lake and Belmar beaches.

“The reconstruction of this project will provide our shore communities and the families who reside along the shore with critical storm, surge and flood protection in the event of future storms,” Smith said. “New Jersey’s almost 130 miles of coastline was battered by the severe wind, high waves and rising ocean. But we know that in most areas where the Army Corps of Engineers implemented beach re-nourishment projects, there was less damage than those where they did not. Where the Corps built higher berms, they held back the water. Where there were low dunes, the water came flooding in. The damage to houses, businesses and other infrastructure was significantly less that in towns where similar re-nourishment efforts have not yet begun.”

“The Corps projects proved themselves extremely worthwhile and we need to continue its work and rebuild where feasible. It is not only the right thing for New Jersey’s recovery, it is prudent federal policy,” Smith said. “Preventing flooded homes and businesses is cheaper and more efficient that repairing them after a water breach. As such, it is necessary, cost-effective and justified for the federal government to provide the Corps with emergency funding to finish beach replenishment and flood protection projects.” 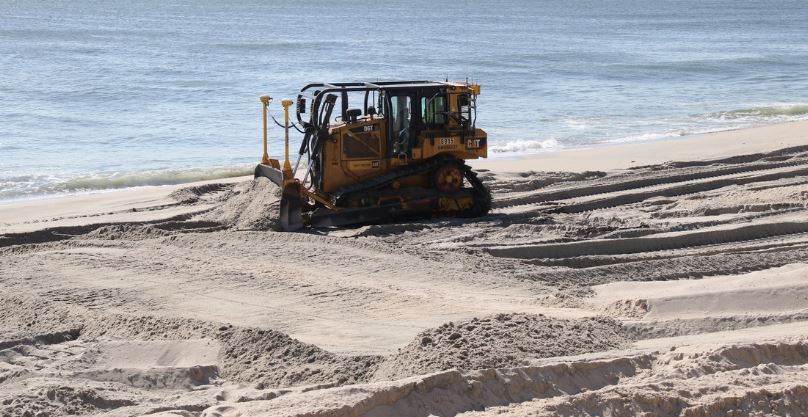