Multiple RI Dredging on the Way

The R.I. Coastal Resources Management Council (CRMC) will be managing and overseeing a number of habitat restoration and dredging projects, including a project at Narrow River that will serve as a pilot for future marsh restoration projects in the state.

U.S. Fish & Wildlife Service (USFWS) received an award from the DOI for marsh elevation and restoration work to be done within the John H. Chafee National Wildlife Refuge on the Narrow River.

Project partners include CRMC, R.I. Department of Environmental Management, The Nature Conservancy, Save The Bay, U.S. Environmental Protection Agency, and USFWS Refuge Program. The CRMC will be working directly with USFWS as a subcontractor for the dredging portion of the project.

Material will be dredged from select locations within the Narrow River to create suitable depths for eelgrass habitat. The dredged materials will then be placed and dispersed on the adjacent marsh surface to slightly increase the marsh’s elevation, primarily in areas where the vegetation has died off or become stressed from subsidence and prolonged flooding.

The restored marsh areas will be replanted, enhancing marsh vegetation and increasing the lifespan and resilience of the marsh complex to future coastal storms and increased rates of sea level rise. The higher elevation will also allow the marsh to continue working as a buffer to storm surge and storage area for flooding.

The Narrow River project will allow the CRMC and its partners to utilize new techniques for increasing the surface elevation of the marsh. The methods, though still in design, will allow for small-scale mechanical equipment to be used in place of large-scale hydraulic equipment. Low-flow pumping methods for adding the dredged material to the marsh surface will be tested during a pilot phase in an effort to minimize disturbance.

The project partners plan to work in small areas during the duration of the Narrow River project, in order to quickly change methods, tactics and restoration plans more easily if an attempted process doesn’t work, if machinery does not perform according to project standards, or if an unexpected challenge arises.

The depth of material added to the marsh will also vary over the span of the project area depending upon the surface elevation, but the average depth is expected to be between four and six inches. In the areas of the marsh where subsidence, pooling and/or erosion have been a problem, more material will be added; some areas at higher elevations will receive a thinner layer. Other locations on the marsh are still considered to be at sufficient elevations, and will not be altered.

Target marsh elevations are based on Real Time Kinematic (RTK) elevation measurements taken throughout the marsh and compared to the existing vegetation communities within the project area. The goal of the project is to return targeted areas of the marsh to elevations that are optimal for marsh plant survival.

“It’s a delicate balance: too little deposition won’t buy the marsh much more time in its lifespan because sea level rise is outpacing marsh accretion,” said Danni Goulet, marine infrastructure coordinator for CRMC. “Too much deposition and Phragmites would soon populate the marsh.”

The CRMC would like to caution boaters to proceed slowly and carefully through the area while work is being done; it is a narrow area to begin with, and equipment will likely further restrict boat traffic. The project has its Water Quality Certification from RI DEM, a Federal Consistency permit from the CRMC, and approval from the U.S. Army Corps of Engineers.

“The Narrow River project is vital to the success of this and future marsh restoration projects, using thin layer deposition techniques to increase the elevation of the salt marsh,” said Grover Fugate, executive director of the CRMC. “This project will serve as a pilot for others, and different methods will be explored to determine which is most successful.”

In addition to the Narrow River project, dredging and beneficial re-use of dredged material for marsh restoration is planned for Ninigret Pond as part of the Salt Ponds restoration project also funded through DOI.

Last June, the CRMC received an award of $3.25 million to conduct coastal wetland restoration and planning within the Salt Ponds Region in southern Rhode Island, specifically within Ninigret, Quonochontaug and Winnapaug Ponds. Planning for these projects is in progress with dredging in Ninigret Pond expected to happen in the winter of 2015-16. 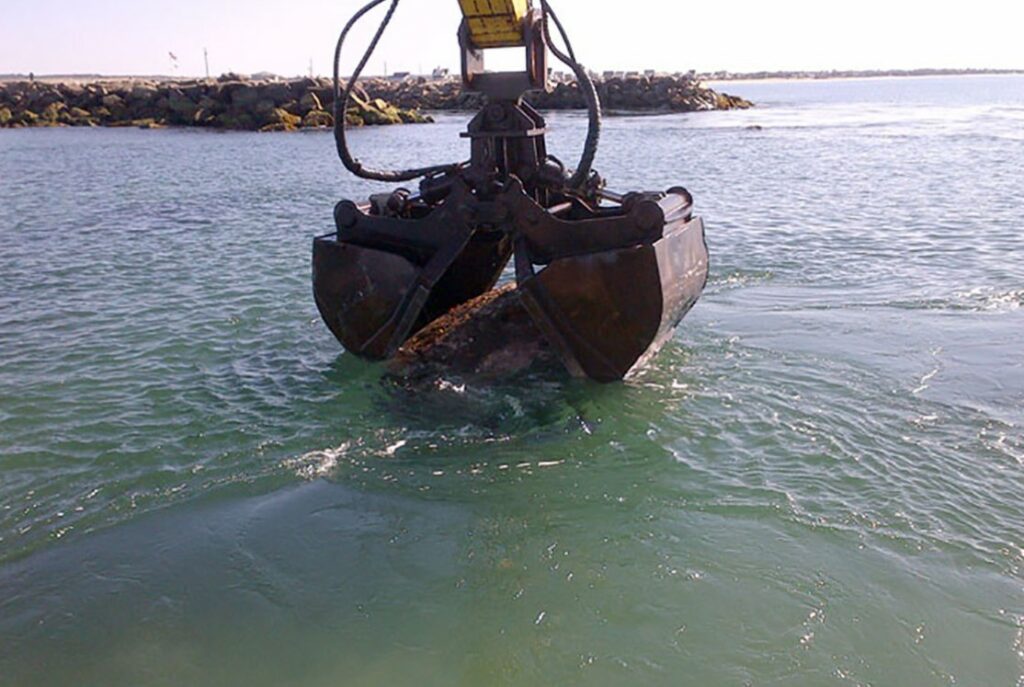