The Ukrainian Sea Ports Authority (USPA), one of the largest state enterprises, is working on some major dredging projects that will be total game-changers for the country’s ports.

Over the next five years, USPA is planning to perform capital and maintenance dredging works in Ukrainian ports, canals and inland waterways with the volume of dredged material roughly estimated at 16.3 million cubic meters.

These plans were recently presented to the representatives of ten foreign and Ukrainian companies during the Dredging Day-2018 event in Odessa.

In an effort to find out more about the current and future developments in the region, we interviewed Mr Raivis Veckagans, head of the Ukrainian Sea Ports Authority.

DT: Let’s kick off things with recently concluded Dredging Day Event in Odessa (October 22), where a lot of important information were revealed. Can you share some insight on this?

Veckagans: The main insight is that we are interested that information about our projects being available to the widest possible range of participants and, above all, to the leading dredging companies. Conducting of the Dredging Day was aimed at establishing such an open dialogue with potential contractors.

Our goal is to ensure the transparency of the upcoming competitions, to attract the maximum number of participants to participate in them. We provide all the necessary information so that the dredging companies can plan their work and take into account the projects of the USPA in the Ukrainian ports in 2019.

At the frameworks of Dredging Day, our partners were able to communicate with the heads of branch offices of the USPA, which told the meeting participants about the specifics of working at each of the proposed facilities. I believe that this approach will allow to estimate fully the tasks required for each of the projects and to understand what kind of dredging equipment and how much is needed for their realization. As a result, at tenders we will be able to receive quality applications from the maximum number of participants.

In 2019, we plan to continue the implementation of capital and operational dredging in Ukrainian ports, canals and inland waterways with a total volume of 16.335 million m3. Will be enough work for everyone.

DT: Representatives of large dredging companies such as Jan De Nul, Van Oord, Boskalis, DEME, China Harbor Engineering Company, Rohde Nielsen, etc were present at the event. Our readers would love to find out more about a level of cooperation between USPA and these major dredging companies.

Veckagans: We are always open to cooperation with leading dredging companies of the world. Now we have a good experience with the China Harbor Engineering Company, which realize large dredging projects in the ports of Yuzhniy and Chernomorsk.

For obtaining these projects, Chinese dredgers in an open competition competed with such well-known companies as LTD Novadeal (Belgium), Jan De Nul n.v. (Netherlands), Van Oord Dredgingand Marine BV (Netherlands), who also wanted to work in Ukraine. In the ports of Izmail and Reni the Romanian company, SC COMPLEX DELTA SRL carries out the dredging.

I want to emphasize that we conduct all our tenders for dredging in an open system of electronic trading. This allows maximum transparency of the competitions, which is important for serious companies who value their time, resources and reputation.

DT: What are the largest dredging projects USPA is planning to take on in 2019? 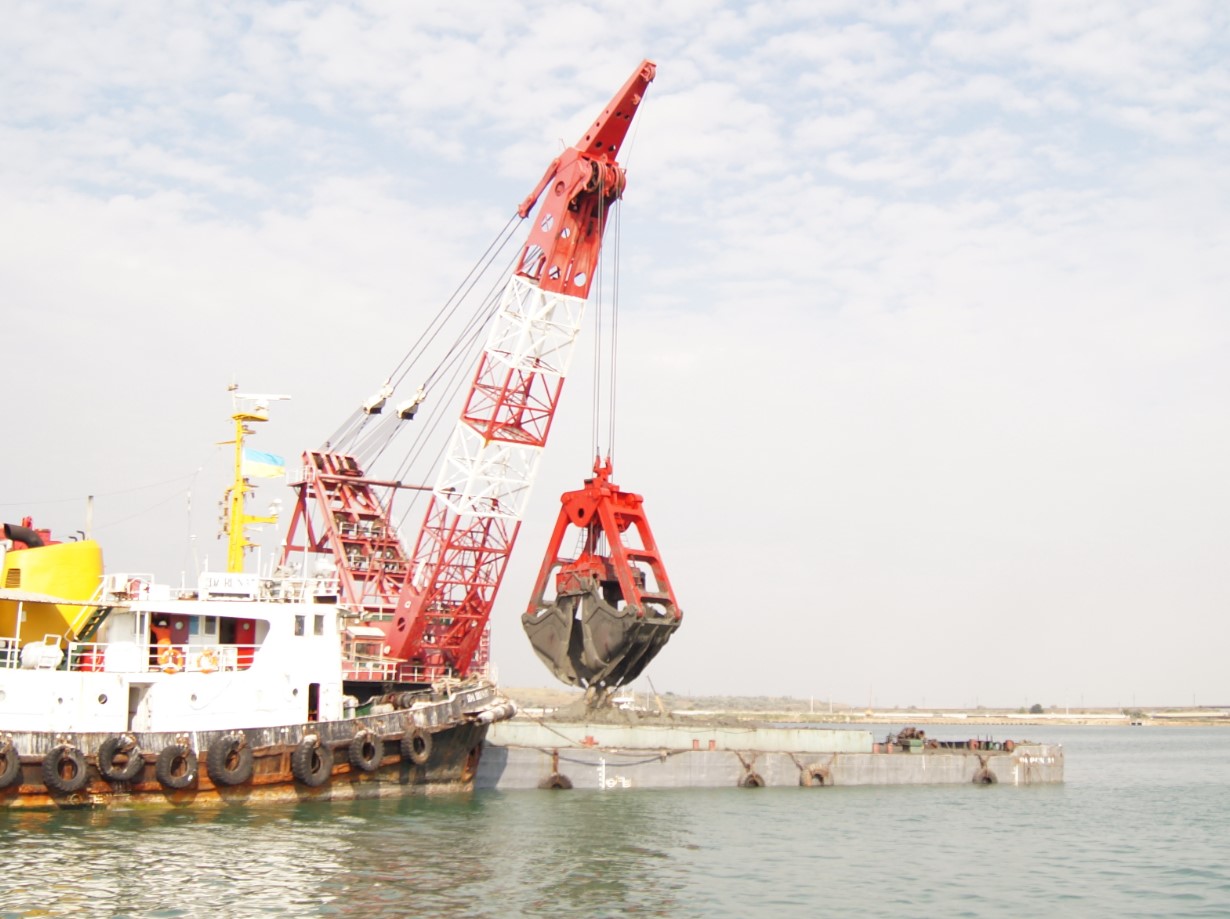 Veckagans: In capital dredging, we face two large-scale tasks. Creation based on port Yuzhniy one of the deepest ports in the Black Sea basin. In the future, its operating depths will be increased up to 21m. In 2019, this port also plans to reconstruct water approaches, shunting zones and operational water areas.

The scope of work in Yuzhny will amount to 6.339 million m3. The project implementation period is 21 months. So this is a large-scale project with an estimated volume of almost two years.

Also next year we will continue dredging projects in the port of Chernomorsk (4-5 stages of reconstruction of the 1st bucket of the Dry Estuary). Here volumes are somewhat more modest.

However, 1.115 million m3 is also a good contract. Moreover, after its implementation, it will be possible to transfer the fleet to another project of the USPA, which, as you already know, we have planned a lot for the next year. This will allow not spending money on logistics and redeployment.

DT: Few months ago, CHEC started a major dredging project at the Black Sea port of Chornomorsk, what is the latest update on the works?

DT: At the beginning of 2018, USPA established a new branch, named Dredging Fleet. Does this move go hand in hand with plans for the dredging fleet expansion?

Veckagans: The basic of the technical base of the branch “Dredging Fleet” consists of ships and special equipment, which we accept on balance from the state enterprise “Ukrvodput”. We have already analyzed the state of the fleet, decided on the tasks of repair; formulated estimates and looking for contractors for perform the works. I think that in 2019 we will be able to start bottom-cleaning work on inland waterways by the fleet of our own branch office of the USPA.

While we do not have such an opportunity, we are engaging contractors in this work. On October 26, 2018, a procedure for repairing digging on inland waterways was announced for 2 lots, this is Kamenskoye reservoir with the expected cost of works of 3 million UAH and Kremenchug reservoir, with the expected cost of works 77 million UAH. All information about the tender is publicly available on the Prozorro resource.

Applications will be accepted until November 28. Therefore, those who wish still have time to submit an application and become the winner of the competition. 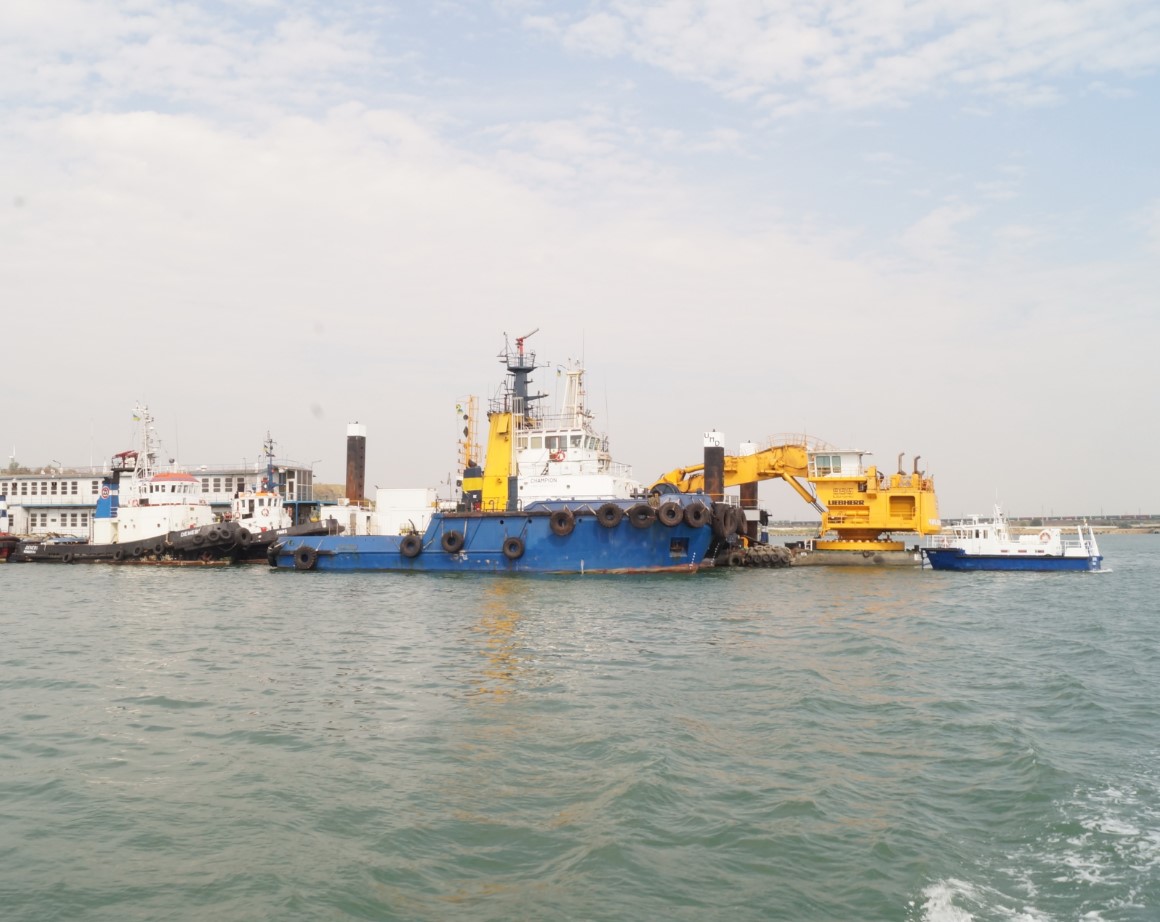 DT: The Delta-Pilot branch of USPA recently announced a tender for the procurement of a new self-propelled dredger. What are the latest USPA plans on expanding its dredging fleet?

Veckagans: Now the technical fleet of the State Enterprise “USPA” consists of three self-dumping dredgers Ingulsky, Meotida, Tiligulsky, one stationary dredger NSZ-6 “SKIF” and one dredger in the composition of the multi-pack dredger “Rion”, two hopper barges, and auxiliary vessels.

As of the end of October, we were able to carry out operational dredging in 6 ports – the water area, canals – with a total volume of over 1.3 million m3 using our own resources.

Taking into account the large amount of work planned for next year and certain problems with the selection of contractors for some projects in this year, the task of strengthening our own dredging fleet is very urgent. While we are talking about buying one self-driving dredger. Further decisions on the purchase of new dredging equipment will be made based on the analysis of the results of dredging works in 2019 and the financial plan of the enterprise.

DT: In your opinion, where do the Ukrainian dredging companies stand in relation with above mentioned firms when talking about investing in dredging vessels?

Veckagans: Now on the Ukrainian market there are about 10 companies that are engaged in dredging at offshore facilities, have the appropriate registration and the necessary documents to carry out dredging works.

According to the information available in open sources, they all operate with leased dredging equipment. Basing on foreign experience, the lack of own dredging equipment in a company, as a rule, is not a negative factor while making a decision on admitting it to participate in the competition and determining the winner.

Here, first of all, important their experience in dredging works, the availability of appropriate contracts for rental equipment and the ability to mobilize the fleet within the specified time-frame.

DT: What is the right way forward for dredging industry in Ukraine?

Veckagans: The only right way is to implement dredging projects that will based on the principles of transparency, openness and fair competition. As the experience of the implementation of the USPA’s large projects in Yuzhny and Chernomorsk shows –  this allows not only to carry out projects ahead of schedule, but also to receive substantial savings, both at the stage of competitive bidding and in their realization.

In parallel with this, we will continue to develop and update our own dredging fleet in order to be able to realize individual projects, primarily for an operational dredging regardless of the market situation, fleet presence / absence at contractors, possible economic disputes and other vicissitudes.

Therefore, we will continue actively involve leading domestic and foreign companies in the realization of dredging projects, as well as in the supply and repair of dredging equipment. I will emphasize once again – USPA is always open for dialogue and mutually beneficial cooperation.