All set for Duluth area dredging

The U.S. Army Corps of Engineers has just announced that everything is ready for the beginning of the 2021 Duluth area maintenance dredging and Minnesota Point beach nourishment project.

According to the Corps, the contractor may begin mobilizing their equipment as early as today but are more likely to start the week of August 1.

Originally, the project called for dredging and placing nearly 100,000 cy. However, the amount of material needed for the works has been reduced due to stringent protocols and significant safeguards put in place to ensure the material is free from man-made debris for beach nourishment.

“Public safety is a top priority for the Corps of Engineers and new requirements will impact the amount of material the contractor can place,” said Project Manager Melissa Bosman. “Our federally-mandated mission is to maintain harbor navigation and we partnered with the City of Duluth to beneficially use the dredged material as beach nourishment along Minnesota Point again this year.”

The 2021 project placement area begins at the pier and extends to the S-curve, just South of 12th Street but North of the parking lot. The contractor will install fencing for safety and the public will not be allowed in those areas. The 12th Street parking lot can still be used for beach access to the South, but not North into the project area, announced the Corps.

USACE conducted a survey of material placed in 2020 during the Spring of 2021. The survey showed 23 areas with high-magnetic signatures, eight above the water surface and 15 below the water surface.

The Corps of Engineers Duluth Area Office already excavated, screened and documented debris found within the eight above-water areas. They found mostly rocks and taconite pellets. The 2021 dredging contract includes cleanup of the 15 below-water areas before placing any new material.

“They should complete excavating, screening and documenting these areas by mid-August,” said Bosman.

In addition to cleaning the areas identified in the survey, the Minnesota Point cleanup plan announced in early June included beach raking. Raking between the pier and 36th Street began June 23 and finished June 29.

This initial raking gathered about 17 cubic yards of debris, mostly consisting of small pieces of driftwood and trash litter. Only about 20 can fragments were found.

After a storm the Corps of Engineers raked the beach again July 15 from the pier to 12th Street. The Duluth Area Office is currently sifting through the debris to document what was collected. 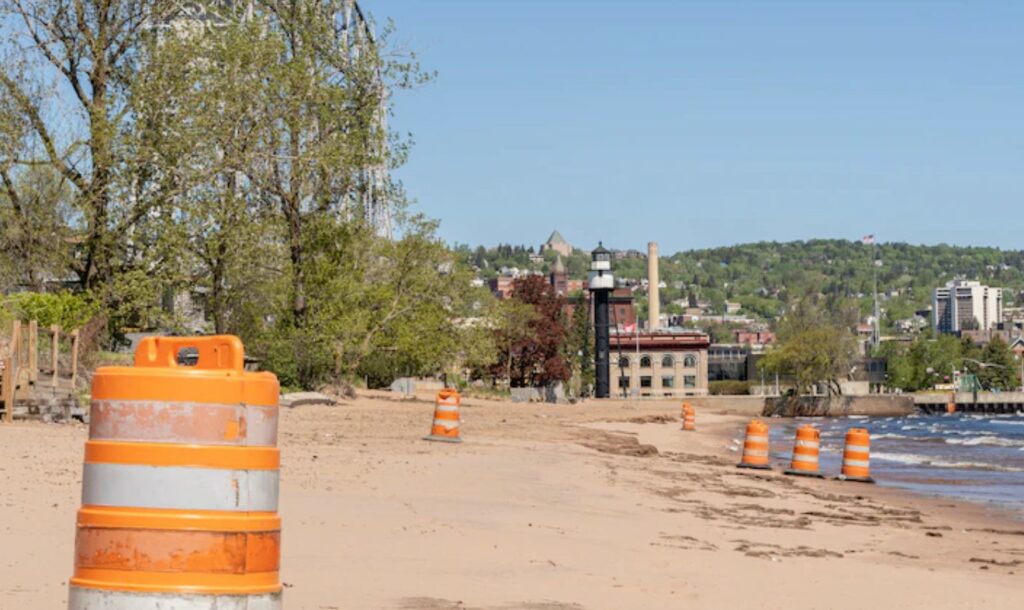