According to the Corps, the project was a $350 million partnership between USACE, the non-federal sponsors – the Commonwealth of Massachusetts and the Port Authority of Massachusetts (Massport) – and a multitude of project stakeholders.

Boston Harbor is the largest seaport in New England and the principal distributing point for regional commerce. The port supports $8.2 billion in economic impact, resulting in 66,000 jobs for the Commonwealth and New England region.

This project, combined with Conley Terminal infrastructure improvements made by Massport, has resulted in significant navigational improvements to Boston Harbor, allowing larger container ships and tankers for both dry bulk and petroleum to access the various terminals, ultimately reducing transportation costs and improving efficiency of maritime transportation of goods to the New England Region.

As a result of the dredging project and Massport’s recent upgrades to Conley Container Terminal, including a brand-new berth and three new ship-to-shore cranes, the Port of Boston now serves 12,000 TEU vessels and has increased its direct global connectivity to reach 18 additional ports in China, Southeast Asia, India, the Mediterranean, the Middle East, Northern Europe and Latin America.

These new global connections will benefit more than 2,500 businesses that utilize Conley Container Terminal to import and export goods.

“We thank the Army Corps of Engineers for their longtime partnership on this momentous project, which has enabled the Port of Boston to serve larger ships and keep goods flowing in and out of New England,” Massport CEO Lisa Wieland said.

The Boston Harbor Deep Draft Improvement Project involved three major phases. The first contract, maintenance dredging of the inner harbor and construction of a Confined Aquatic Disposal cell, was completed in December of 2017. The second contract was awarded to a joint venture of Cashman Dredging and Dutra Dredging Group in 2018 for $122 million and involved mechanically dredging approximately 11.7 million cubic yards clay, gravel, sand and fractured rock within Boston Harbor’s North Channel, Main Ship Channel, Turning Basin, Reserved Channel and Presidents Road Anchorage. The second contract work began July of 2018 and was completed in November 2020, an astounding year ahead of schedule.

“Most of the dredged material was placed in the Massachusetts Bay Disposal Site, approximately 20 miles offshore of Boston Harbor, with a small fraction of the material used as a cap to the Main Ship Channel Confined Aquatic Disposal cell just downstream of the inner confluence of the Chelsea and Mystic Rivers,” Thalhauser said.

The third and final contract involved dredging, drilling and removal of hard rock to complete the deepening project work. That phase of the project was completed in June 2022 by Great Lakes Dredge and Dock LLC, who were awarded the contract in March 2021 for $61.8 million. The company began work in June 2021 by mechanically dredging rock in localized areas of the harbor and removing the remaining rock by drilling, removal and dredging the rock material.

According to Thalhauser, key partnerships and extensive coordination with a host of local and federal organizations contributed to the early completion and under-budget cost of this massively complex project.

“First and foremost, we owe many successes to the partnership and accommodations made by the U.S. Coast Guard, the Boston Pilots Association, the Boston Harbor Docking Pilots, Massport Aviation Operations at Boston Logan International Airport, recreational and commercial fishermen, and many local, state and federal environmental resource agencies,” she added.

“Secondly, this project, decades in the making, was shepherded successfully by the New England District’s planning, environmental engineering, and construction team members. And finally, the project would not have been possible or as successful without the technical, financial and partner support of the Port Authority of Massachusetts,” Thalhauser concluded. 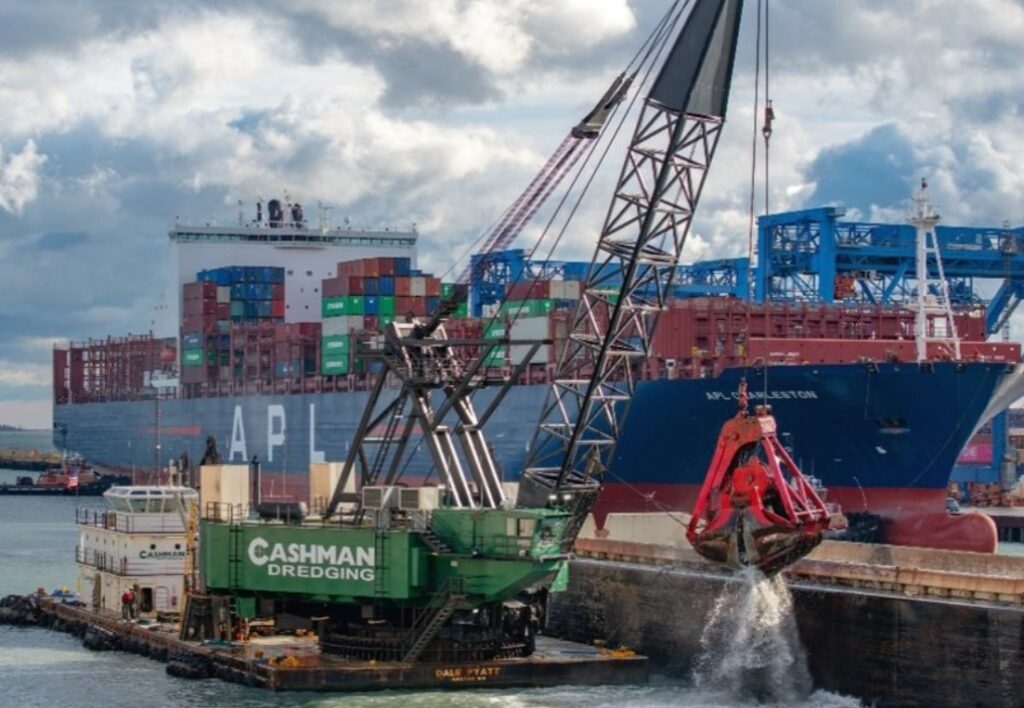