Contract B will deepen approximately 5 miles of the St. Johns River in addition to the ongoing deepening of Contract A, which covers approximately 3 miles from the entranceway inland. Contract B’s base funding will cover roughly 2.5 river miles of deepening, with the remainder of the funds provided in August 2019 to cover the additional 2.5 river miles.

“This award represents another key milestone to improve harbor infrastructure that is vital to our economy,” said Col. Drew Kelly, commander of the Corps’ Jacksonville District.

Contract B is the second of multiple construction contracts that will deepen the existing Federal navigation channel from its current authorized depth of 40 feet to 47 feet. Contract work will also widen specific areas for two-way traffic and turning, and also provide some advance channel maintenance.

According to USACE, the largest ships calling on Jacksonville’s port must arrive and depart lightly loaded, making them shallow draft enough to navigate the current 40-foot channel depth. This means that cargo volumes that should move through Jacksonville as the most cost effective route to market are diverted to other ports with the capacity to handle deeper draft ships.

“This project’s success is actually a combined collaboration of federal, state and local partners working closely together to meet regional and national needs, as well as future population growth. We value our continued partnership with the Jacksonville Port Authority, the City of Jacksonville, and the State of Florida,” he said.

Contract B includes dredging roughly 5.7 million cubic yards of material from River Mile 3 near the Naval Station Mayport runway, westerly to Mile 8 at the east tip of La Baron Island. This work does not involve blasting.

The contractor will transport excavated material and place it in the Jacksonville Ocean Dredged Material Disposal Site located about six miles southeast of the entrance channel jetties. The contract includes the base, Mayport runway to Buck Island, and Option A from Buck Island to La Baron Island.

Construction is expected to start in late December and the estimated construction duration is roughly five years (1,010 days). 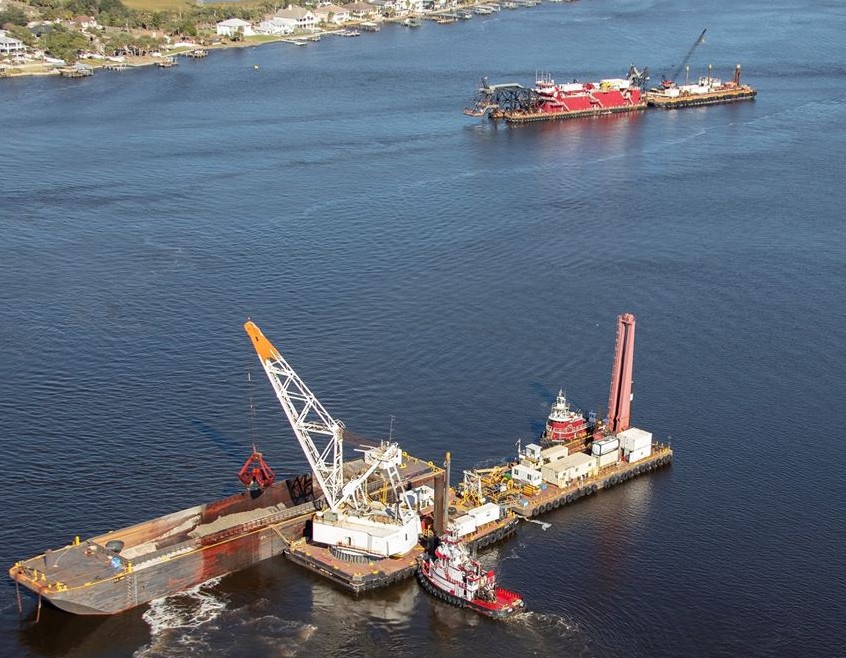